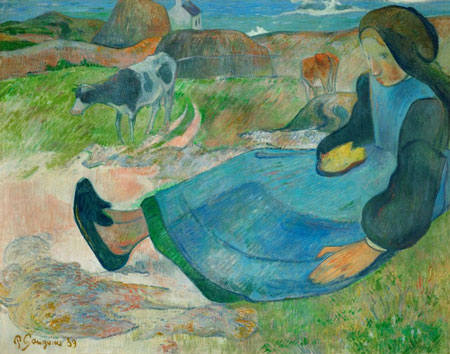 Paul Gauguin’s reputation precedes him. A French stockbroker turned artist, he left his wife and five children to travel and paint the Polynesian Islands, in search of an idealized version of the exotic. He fled his bourgeois existence to visit, live, and eventually die in Polynesia (1848-1903).

“I’m leaving so that I can be at peace and can rid myself of civilization’s influence. I want to create only simple art. To do that, I need to immerse myself in virgin nature, see only savages, live their life, with no other care than to portray, as would a child, the concepts in my brain using only primitive artistic materials, the only kind that are good and true." (Gauguin, interviewed before leaving for Tahiti February 23, 1891.)

Sixty works by Gauguin (drawings and sketches and more recognizable oil paintings) are shown along with sixty indigenous sculptures in wood, shell and bone from Tahiti, Easter Island, and the Marquesas Islands. Gauguin attended the Paris World’s Fair in 1890, and the Polynesian sculptures in this exhibit, ranging from figurative works to headgear and vessels, are represented as similar to the pieces the artist saw there. Sculptures include an emaciated man carved in wood, an ornately decorated wooden vessel by Patoromu Tamatea (one of a handful of Polynesian artists who are named), and squat stone figures known as tikis.

Gauguin’s first Tahitian destination was urban Papeete, and his works from the city depict beautiful, darkskinned women with melancholic expressions, outfitted in frumpy Western dress. Two iconic oil paintings from this era might be said to represent dissatisfaction with urban life. One depicts a Tahitian woman sitting stiffly in a high-collared blue dress, "Vahine no te Tiare (Tahitian Woman with a Flower)" (1891), while another, "Faaturuma (Melancholic)" (1891) shows a woman in a voluminous pink dress in a rocking chair, a handkerchief in one hand. In both pieces, one perceives Gauguin’s own disappointment in not finding the simple island life he sought.

These works are followed by more “primitive” and perhaps idealized images from rural Tahiti, where Gauguin made his second visit (1895-1901). Paintings from this period feature over-rich colors, flowers, and expanses of naked brown skin. Women are relaxed, outside, and wear less clothing. "Arearea no varua ino  (Reclining Tahitian Women" (1894) features two women on a beach, while "Three Tahitians" (1899" depicts three half-naked figures. A woman in a deep red dress looks over her shoulder at the viewer, a shirtless man in the center is flanked by a woman wearing only a white sarong around her waist; she holds a flower and her arms barely cover her bare breasts. These poses seem to posses a certain studied innocence.

Organized by the Art Centre Basel, this is the blockbuster show's sole American stop, and includes works gathered from 21 countries. The Polynesian works include representations of poverty and hunger, as well as ceremonial garb, and highly decorated weapons. These pieces offer a tangible, historical record of how the Tahitian people thought of and represented themselves during Gauguin’s time and beyond. They serve as a bit of cultural correction to his often idealized imagery.