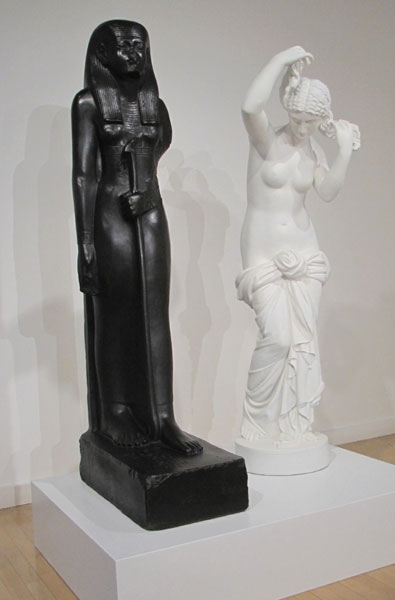 It’s a hybrid age culturally, with appropriation decontextualization, recontextualization  and mix-and-match juxtaposition — often across media — serving as governing principles of visual art. Fred Wilson (destined to be catalogued as a combination of "African, Native American, European and Amerindian“ genes, who grew up as an outsider in white middle-class schools) is one of the conceptual artists who wholeheartedly embrace the postmodernist social critique expressed through these compositional strategies. His work focuses on racial stereotyping through history as expressed in the wares of museum storage rooms: historical artifacts, replicas, and, on occasion, original art objects. In an Art21 interview, he said, “I get everything that satisfies my soul, from bringing together objects that are in the world, manipulating them, working with spatial arrangements, and having things presented in the way I want to see them.”

The current show continues his deconstruction of racial and national symbols and stereotypes that are embedded within objects. The sculptures and installations are charged by discordances, as before. The major motif is the blackamoor (in the US, the lawn jockey would be analogous). Wilson observed this stereotype to be almost ubiquitous in Venice when he was there in 2003 to represent the US at the Venice Biennale. These figures are seductively rendered in the hand-blown glass that Venice has famously produced for centuries. In "Goin’ Places," the small, elegant figure of a servant made of clear glass and embellished with white and gold accents bears a floral candlestick holder, but no head. Adjacent to it, but facing away, sits a large Negro head made of black glass, ornamented with an elaborate gold-speckled hairdo, and sporting large red earrings that resemble the enlarged lips of the Mammy stereotype.

A small figure of a black boy dressed like a figure from The Arabian Nights — in loose trousers, pointed slippers, and turban — holds a pole supporting a globe in "Untitled (Zadib, Sakoto, Samori, Veneto, Zanzibar)" (2011). The globe, lit from the inside, is almost completely covered by brushily applied satin-finish black paint, and adorned with five black tassels, each designating a location used in the slave trade. Veneto is the region dominated by Venice, the key port city that serviced the trade between Europe and Africa, including human trafficking. Ceramic Sambo and Mammy figures in the form of ceramic busts, ashtrays and and cookie jars also appear in the two small installations: On a tabletop amid gleaming white tableware, beneath the statue of a Greek woman, armless yet vigilant in "Love and Loss in the Milky Way" (2005); and arrayed in a vitrine, a grinning choir, between video monitors depicting the figures’ destruction, in "Me and It" (1995).

Images  that signify traditional “white” art are used to destroy myths of innate racial and cultural superiority. "Unititled (Bust)" (1992-2000) features the armless and headless upper chest of a classical Greek figure set atop a pedestal. From the rough-edged neck cavity protrudes the small black head of a Pharaoh — no doubt an allusion to the theory that the first great civilization in Africa or anywhere else was Negroid. A seated Egyptian figure in simulated black basalt (actually painted plaster), its nose and feet broken off, sports the New Age accessory of a crux ansata, a handled cross, in "Untitled" (1993). "Ota Benga" (2008), named for a pygmy, the last of his tribe who was exhibited in a zoo a century ago, and who shot himself in despair, is a bronze portrait bust of a unnamed black boy (not the pygmy of the work's title) adorned with a white silk scarf. "The Mete of the Muse" (2004-2007) pairs standing figures from Egyptian and Greek history, black and white, hieratic and naturalistic, respectively. Given the prevalence of high-contrast blacks and whites, the white walls of the gallery are visually inhibiting

A wall sculpture composed of four black glass teardrops, entitled "Drip Group" (2010), symbolize the soulful sorrow behind the installation's elegance. A series of twenty-five black and tan acrylic on canvas paintings of flags, reduced to black contours, as if for a coloring book, represent countries associated with the slave trade, e.g., Sierra Leone, Somalia, Bahamas, Cote d’Ivoire, Sudan, South Africa, Eritrea, Angola, Botswana, and Rwanda, adding a final exclamation point to the poignancy of this body of work.