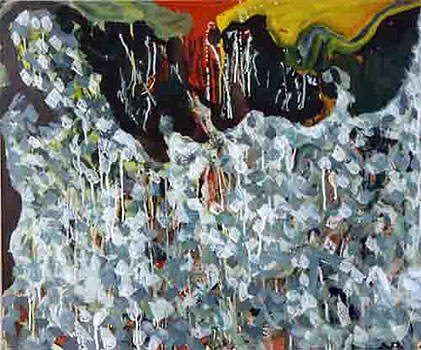 There have been strong reactions to Abstract Expressionism over the course of the more than half century since its mold-breaking beginnings. Abstractionist painting being done today is often quickly labeled as derivative. But there’s something compelling about the energy and engagement in the work of artists who were committed to it at the time of its historic rise. Abstract Expressionism spanned both coasts, as a uniquely American phenomenon, cementing the nation’s place, particularly New York’s, as the major player in the art of that time. Seldom, however, does one get the opportunity to view the work of those abstract painters on the West Coast whose work was every bit as strong, and every bit as compelling as their East Coast contemporaries.

“Bay Area Abstraction: 1945-1965” focuses on three of those artists, Charles Strong, Frank Lobdell, and Jack Jefferson, two of whom studied with Clyfford Still at the California School of Fine Arts. Curator David Eichholtz places those two, Jefferson and Lobdell, in close proximity to one another in the gallery’s front space. While this might be homage to their affiliation with the California School, there are also stylistic similarities in the earthy and raw works produced by both artists in the pre-AbEx 1940s. But it’s their differences that propel the exhibition.

Jefferson’s “Chestnut Street #2” and “Chestnut Street #3” are intimately-sized paintings titled for the location of one of his studios. They show a mixed interest in exploring figuratively suggestive work and pure abstraction, layered in thick applications of paint. Lobdell’s work is more formal, seducing the viewer with structure and pattern. Lobdell’s later paintings evoke a sense of movement and of depth. Jefferson, curiously, went in another direction, exploring flatter planes of color.

Paintings by Strong, whose work comprises a second space within the gallery, are the most visually dynamic: maelstroms of color and form whose large scale can be dizzying. “ Wharf Road,” easily the largest of the paintings here, takes center stage literally and figuratively. The rest of the exhibition swirls around this masterly abstraction.

A related exhibit of other Bay Area painters in a third gallery space, a few of whom were students of Jefferson, show the influence of California School abstraction. Of necessity, fewer examples by each artist are included, but works by Deborah Remington, Hassel Smith, and Lilly Fenichel stand out.

This is how most secondary market shows should be presented: as historically illuminating, with an eye for the spread of influence. There is a startling, elemental power evident in this show that offers evidence why artists are still influenced by the genre some 60 years later.