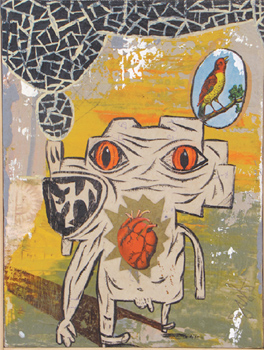 Eclecticism and hybridity may be common practice these days, but who would have thought that graffiti art, pop surrealism, and identity art (loosely defined) could combine

Eclecticism and hybridity may be common practice these days, but who would have thought that graffiti art, pop surrealism, and identity art (loosely defined) could combine as exuberantly as they do in John Yoyogi Fortes\' paintings? Like his postcolonial colleagues Enrique Chagoya and Manuel Ocampo, Fortes employs cultural mash-ups to put a humorous and absurd face on the darker truths of imperialist history: his 2002 Triton Museum show, \"Awakening the Sleeping Monkey,\" dealt with the 1904 exhibition of 1200 captured (aka liberated) Filipinos, at the St. Louis World\'s Fair, as cannibals. Fortes has also, however, explored how family, memory and identity persist or change in the tumultuous modern world. In \"Parallel Boondocks,\" he continues mining lowbrow/comic imagery from newly met East and West for insights into the funhouse of modern consciousness. Fortes: \"It\'s between the materials and me. It\'s about aligning that inner space where ideas flow freely and reveling in that moment where actions transcend language.\" The resultant paintings, with their layers of images and ricocheting meanings, are \"map[s] to various levels of consciousness.\"

These maps are complex and ambiguous. Runt, a large diptych, combines beige, red and gray patches and swatches, some brushy and diffuse, others defined by hard edges, straight or scalloped, with loops, stripes, patterning and writing (manchica, or blot), and a bizarre cast of \"actors\": a naked, blob-headed muscleman posing atop a pedestal lying between female legs; a wooden duck\"s head, bearing a bird photo in its eye and sporting a brick-patterned frying-pan hat; a snake-necked woman\'s head emerging from an ovoid picture frame; and a cartoon dog head, scowling, with its eyes transformed into probing bloodshot pseudopods. Cartoon animals reappear in the non-rectangular diptych, Repetition, Redemption, Relapse, joined by figure studies reminiscent of David Salle\'s, but collaged here rather than painted. Smaller works (Art is Evil, Punk, It Sounded a Lot Better Before I Said It) function as funny (in both senses) cartoon portraits reminiscent of Jim Nutt and Roy De Forest.