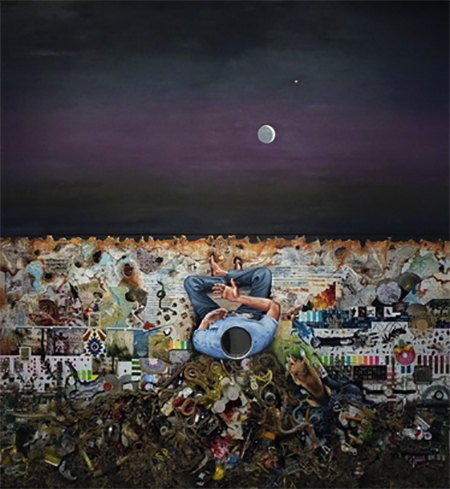 Fernando Casas is both artist and philosopher, and has explored speculative questions in his images for over 40 years.

Although Fernando Casas considers himself first and foremost an artist, it is impossible to separate the artist from the philosopher. He has been using his paintings, drawings, and installation pieces to explore philosophical questions about perception, time, and duality for more than 40 years. Born in Bolivia in 1946, he has studied art and philosophy, and holds a doctorate in philosophy from Rice University, where he teaches the subject.

“Human beings cannot see their own heads,” is the first sentence of one of his published articles, which is titled “The Limit of the Visual World,” and which also serves as the title to this exhibition. Several of the paintings in this show reflect this thesis. In “Dinosaurs’ Tracks,” for example, a figure is seen from above. Where his head would normally be, there is a hole in the canvas. In “Laöcoon,” the central figure has a round mirror instead of a head. Casas’ observation is that the viewer can only see his own location in relation to other objects around him, but he can never see his own head unless he looks in a mirror. Casas concludes, therefore, that a complete depiction of the visual world is impossible. Any attempt to depict it requires a void where the mind of the viewer would be.

This actually is one of three simultaneous exhibitions – the others are “The Perfection of Time” at Gremillion Gallery and “Duality” at Redbud Gallery, which adjoins G Gallery. Recent as well as key works from the past are included in the shows, making it something of a retrospective. The overall organizing idea for them is “co-constitution,” a term that describes what happens when various factors interact to create a totally new reality. His pictorial investigations are the result of years of observing and recording the world as he sees it. They reflect his philosophical musings, as well as his efforts to make certain “hidden” realities visible.