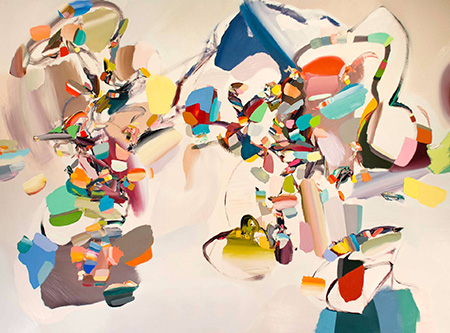 Trey Egan’s energetic abstractions, "Future Glow," expand the scale and complexity of previous canvases. Egan completed an MFA in 2013 at the University of North Texas, and since then he has kept busy creating new work. His current paintings remain firmly grounded within the tradition of 20th century lyrical abstraction, presenting a picture plane with an all-over placement of paint. Egan employs numerous implements to render aggressively colorful visual phrases.

Through looking within himself in a trancelike state, he builds and layers the paint with an energetic intensity.  At times while painting he immerses himself in several styles of electronic music; this translates into an observable visual rhythm.  The colorful brushwork is laid down with no hint of empirical order; they seem random and even chaotic as they build a feeling of depth. Final touches of color hover over the substrate, as in “Flyer," and come closest to the viewer in an emotional interaction with the whole. One of the largest works (68 x 92 inches,), "Zero Gravity Ritual," steals the show in a horizontal format that features two distinct sections of entangled forms. They are separated but for a small lifeline that joins them in the center of an otherwise austere design that is full of tension.