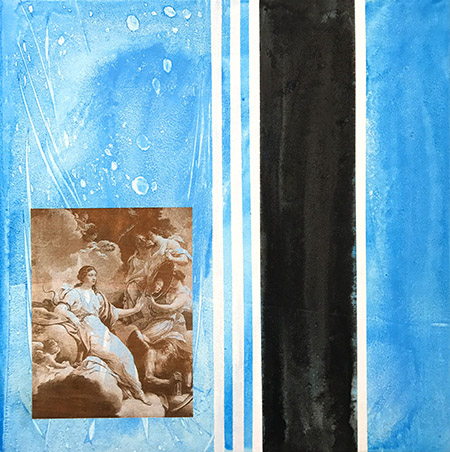 “The Office,” a recently launched special-exhibition space apart from the main gallery, has quickly offered up unexpected, sometimes vaguely off-kilter, delights. This month’s iteration, “Nawader,” showcases a panoply of mixed-media works by Jacqueline Ehlis, a gifted visual innovator and late-1990s protégée of Dave Hickey at the University of Nevada Las Vegas, who is far too seldomly exhibited in the Pacific Northwest.  Ehlis has filled the boxy space with a host of diminutively scaled painting/ceramic/print hybrids, which have a decidedly more organic feel than the slick opalescent hemispheres for which she is perhaps best known.

The works, all created between 2015 and 2017, offer a veritable master class in how to combine disparate media into satisfyingly incongruous wholes. The installation on the gallery’s south wall is especially gonzo, with dozens of paintings and reflective surfaces ascending in lines and curves to the ceiling. The exhibition’s title is an esoteric Patti Smith reference — apropos given that Ehlis’ oeuvre, like that of fellow UNLV alum Tim Bavington, has an inherent musicality: jaunty optical rhythms in complex counterpoint, invigorating verging on frenetic, singing in the sweet spot between the sensual and the conceptual.