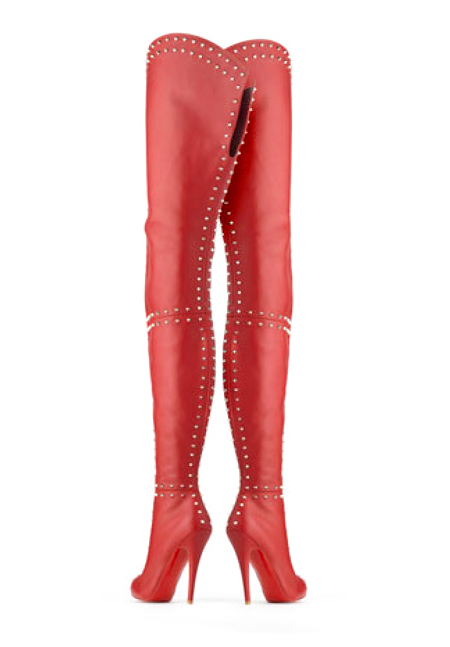 The "Killer Heels" have marched across the country from the Brooklyn Museum and arrived, exhausted and footsore in Palm Springs. The gorgeous “Killer Heels:  The Art of the High-Heeled Show” presents hundreds of shoes, accompanied by a luxurious catalogue that is worthy of its subjects, that celebrate an historical oxymoron, one of the most dysfunctional objets d’art ever devised by devious men. An attractive device essentially dedicated to the torture of women, the high-heeled shoe was once the prerogative of the royal male of the French court. Louis XV was known to mince about in his silk covered “Louis heels,” point his sharp toes and lean back on the slightly splayed heels, while regarding his groveling courtiers. Meanwhile high-born Chinese ladies of the Manchu dynasty were cramming their crushed toes and humped feet into tiny silken receptacles resting on a pedestal, also called a “shoe.” As with the Chinese ladies who were forced to live with broken bones their entire lives, to endure the torment of high heel shoes was a privilege, expressing not just the absence of the need to labor but also the ability to walk. By the late-eighteenth century, European men abandoned the high heel as they abandoned monarchy, and for a brief period of time it seemed that sanity had returned and heels became practical. However — and history does not recognize coincidences — the more independent women became of men, the higher the heels of their shoes became.

Today, as women around the world gradually fight their way into the military and the board rooms, they are also encouraged to flaunt their privilege by purchasing Killer Heels. In their mildest forms, killer shoes can be reasonably benign: a nice Christian Louboutin shoe with a velvety and suggestive red underside would suffice in its modest simplicity and haute height. If one were cold or otherwise employed on the streets, a pair of crotch high red leather high-heeled riveted boots named “Metropolis” would inspire any number of fantasies. But if one wants to walk (or not) dangerously, a needle-heeled creation by Chau Har Lee can double as a weapon of choice, should one be threatened while standing still. My favorite designer in the exhibition, Iris van Herpen, works with United Nude. Her Beyond Wilderness is a slowly moving bramble bush of twisted vines, the result of 3D printing. While there is no doubt that some brave sole has worn the Prada Wedge Scandal, it is clear to those of us who prefer to remain on the ground that the Killer Heels are fetish objects of desire. As the Museum insists, these shoes are cultural signifiers, but of what? While perusing Roger Vivier and Alexander McQueen, the viewer can contemplate shoes as objects of affluence, as instigators of male fantasies or as signs of the dehumanization of women. Or one can just give in to the indulgence of art as a sublime fantasy of pointlessness and succumb to delicious scopophilic joy.