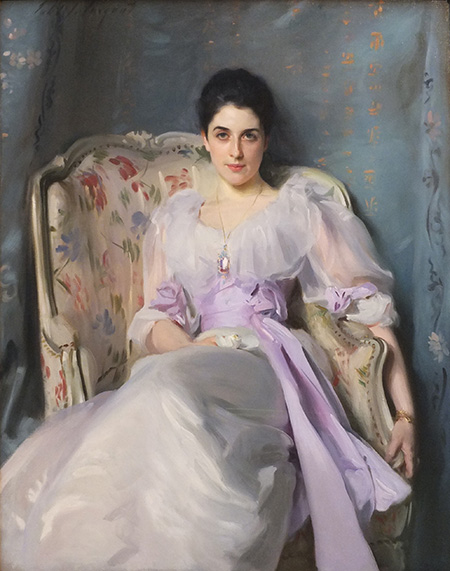 Valentine’s Day is a good time to think back on our art crushes: specific artworks we grew infatuated with at particular times in our lives. Sometimes an art crush lasts only a fortnight; other times it stretches into a lifetime love affair. I get a lot of art crushes on portraits, which can inspire me to “Somewhere in Time”-like reveries. Thomas Gainsborough’s “The Honorable Mrs. Graham” (1777) turns my knees to jelly, as do Titian’s pensive “Man with a Glove” (1520) and Anthony van Dyck’s fabulously fey self-portrait of 1620-21. Then there’s a trio of ravishing, and very different, women portrayed by arguably the most skillful portraitist ever to wield a paintbrush, John Singer Sargent. His notorious, bare-shouldered “Madame X” (1884) contrasts dramatically with the wholesome ingenue in the eponymous “Helen Dunham” (1892).

But it is Sargent's “Lady Agnew of Lochnaw” (1892) who reigns over my art-heart like no other. This portrayal of a then-27-year-old society hostess named Gertrude Vernon Agnew (wife of Sir Andrew Agnew of Lochnaw, Scotland) normally resides in Edinburgh but is currently the centerpiece of the traveling exhibition “Masterpieces from the National Galleries of Scotland.” That show opened its tour last November at The Frick Collection in New York, closing February 1. It next lands at the de Young Museum in San Francisco (March 7-May 31) before finishing its run at the Kimbell Art Museum in Fort Worth (June 28-Sept. 20). Although I’ve admired the painting in reproduction since college, I had never seen it in person until last December at The Frick. The experience was damn near magical.

“Never have we seen a canvas attain such a measure of all-round beauty,” read a review of the portrait after it debuted at the Royal Academy in London in 1893. The work’s appeal has always owed equally to the subject’s enigmatically bemused expression — the raised eyebrow and ever-so-slight smirk in the lips — as well as to Sargent’s virtuosic treatment of her diaphanous tea gown, with its cascading lilac sash, as well as the luxurious fabric of her bergère armchair and the Chinese silk behind her. The piece freezes in time an era of languid, drawing-room aristocracy at its apogee: the instant just before a life of leisure and frivolity curdles into decadence.

It’s always a thrill to behold well-known artworks for the first time in the flesh, and my recent encounter with Lady Agnew was especially gratifying, if uncanny. As I was taking in the portrait from about five paces away, something very curious happened: Lady Agnew began to breathe. That is, she appeared to breathe, as if her chest were rising lightly and falling as if with inhalation and exhalation. Perplexed, I  turned my head away, then back. The effect stopped when I looked directly at the chiffon bodice under which the motion seemed to be happening but returned whenever I looked straight into the sitter’s eyes. I walked forward, examined the paint closely, and ascertained what I took to be the explanation. In the passage work directly under the bodice, the artist’s alternation between long brushstrokes of white and gray was inducing an optical illusion: a chromatic vibration akin to a moiré effect, which lent the impression of respiration.

Portraitists have always made it their mission to transubstantiate inert paint into the semblances of living, breathing subjects, and in the case of “Lady Agnew,” Sargent accomplished this feat almost literally. Lifting elements of Impressionist opticality and deploying them in the service of his own, more Romantic aims, he accomplished a bit of inspired necromancy. The real-life Lady Agnew died at age 66 in 1932. In her family crypt in Northamptonshire she lies upon a slab, but within a gilded frame she holds court each day in her tea gown and silken sash, unspeakably glamorous, immortalized through an artist’s alchemy.