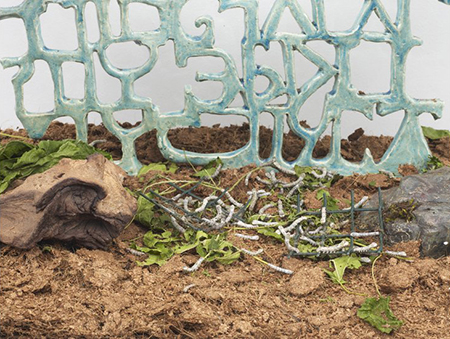 “The Ecstasy of Mary Shelley” features seven artists who share a primal fascination with the process of transmutation. All share an almost bi-polar attraction to the highs and lows of existence, and each is particularly drawn to the pleasure/pain paradoxes associated with mutated existences.

Conceptual associations are drawn from a variety of subjects and experiences, such as surreal dream imagery, ritual elements and political distress. However, as the title suggests, inspirations also stem from Mary Shelley’s Dr. Frankenstein, a mad scientist who created a living creature from dead material through experiments with electricity. Another key source is the narrative of St. Teresa of Avila’s (1515-1582) vision of spiritual ecstasy produced by thrusts to the heart by an angel with a golden spear. This was most notably depicted in Bernini’s sculpture “The Ecstasy of Saint Teresa” (1651).

Shelley (1797-1851) wrote her masterpiece in the early 19th century, when the science of electricity and pseudo-science of alchemy clashed with occult ideas. Frankenstein’s monster represented the potential for new scientific creations to go wrong, the implication being that monsters are not born but made. Considering the advances in science and technology in the two centuries since, we have unleashed the creation of some previously unimaginable monsters, such as nuclear weapons.

But it is the monsters within us that some of these artists attempt to fathom and exorcise. For some, transformative ideas may stem from surreal dreams or mythology, their focus centered on the intersections between science and mysticism. Others draw from historical and literary sources, using interdisciplinary methods to upend metaphorical monsters such as imperialism and colonialism.

Nathan Danilowitz’s large-scale installation serves as a passage into the exhibition. Starting at the front entry room, it  moves into the main gallery. Along the way, on black painted walls are geometrical drawings and architectural elements such as flying buttresses. Candice Lin’s “The Worm Husband (Our Father),” alludes to the forced adaptations produced by colonialism, particularly when societies with different ethnicities are conquered by predominantly white societies. In her hand-blown terrarium, silkworms weave cocoons, metaphorical references to how these worms were ostensibly used in creams to whiten naturally dark faces.

Valerie Hegarty subverts 19th century art historical revisionism in paintings that are repainted and then battered beyond recognition. “Ghost of History,” for example, was inspired by John Faed’s portrait of George Washington taking a salute at Trenton. Extending an earlier series where she redirects the narrative of American heroic paintings, she uses ruination as a method to distort the original works' idealism beyond recognition.

Cassils is a transgender artist [thus the second person plural pronoun is used in this article—Ed.] who demonstrates transcendence through ritual performance and body art. They exhibit a video of their performance “Tiresias,” a Greek mythological tale. A figure in ancient Thebes’ historical legends, Tiresias was transformed from a man into a woman. In the spirit of catharsis, Cassils, creates draconian performances as a way to transcend physical limitations. They follow in the footsteps of artists such as Chris Burden and Barry Le Va, who put themselves through extreme physical ordeals. Their “Tiresias" performance consists of pressing their body against the back of a Greek male torso carved out of ice. Over a 4 to 5 hour time period, they melt the ice with his body heat. It’s an attempt to prove that not only can transformation be a continuing process, it often includes pain and endurance as part of the price of admission.

Naotaka Hiro's video of his kinetic sculpture “Night and Fog, Tubes on Black Mountain” was created in response to a documentary he saw about the Holocaust. Hiro’s works, which stem at times from dream imagery, are often centered on interior body parts. His representations vacillate between the conceptual and literal, specifically when he breaks the body down to basic elements, such as entrails. In “Night and Fog,” a long tube of red meat slowly unravels as it swirls around the surface of a black ziggurat. Eventually falling apart, the images remind us that the remains of a body will decompose to oblivion.

As these artists attest, transformations can produce paradoxical mixtures of pain and fear. Or, as exemplified by the Frankenstein metaphor, they can also create chaos.