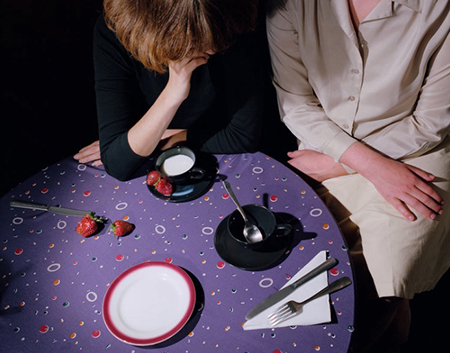 Jo Ann Callis is a contemporary Surrealist. For over 40 years, she has been making photographs, paintings and sculptures that are witty, sensual and unexpected. Whether photographing people or objects, Callis infuses her subjects with an uncanny aura that causes pause and then delight.

The selection of images that make up “Now and Then” illustrates the scope of Callis' vision. Photographs from the 1970s fill the front gallery, whereas a few from the ‘80s and ‘90s share the backroom with an installation of her latest sculptures. Eight table-top ceramic, paint and beeswax objects are presented as curiosities that can be looked at from all sides. Less than seven inches high, each is a combination of strange organic shapes in pastel tones that suggest featureless and headless figures. Each sculpture is placed upon a Lazy Susan so they can be spun and seen from all sides.

In addition to the photographs and ceramics, Callis paints. Always pushing personal boundaries, she paints pictures of clouds, interiors, dogs and babies. What is peculiar about her close-cropped, realistically rendered canvases depicting babies is not only that the child's head fills most of the space, but that they are almost double life size. The hairless child in “Untitled (C.S.),” (2000) has dark, deep-set eyes and a complacent expression that feels alien. “R.C.” (1999) appears furious to be dressed in a frilly outfit. With arched eyebrows the child appears to already have adult moods and a distinct personality. Callis' baby paintings do not evoke an innocent awwww. They are more creepy than angelic.

Callis' photographs have an affecting sense of composition. She also excels at achieving a synthesis of light and color. “Woman with Blond Hair” (2017) is an enticing image depicting a woman lying face down on a bed, her head atop a pillow. Shot from the back, Callis has arranged the woman's blond hair so that it fans out to cover her neck and most of the pillow, somewhat reminiscent of Cousin It from the Addams Family television series. A drawn line extends from the part in her hair down her back, dividing the body in half. The body and hair have a golden glow. Glowing or spot lit body parts also appear in “Cigarette in Toes” (1976-1977), a dramatically lit image of the legs of a woman resting on a wooden dresser. Between toes with red nail polish is a lit cigarette. The image is suggestive and humorous. “Wet Jacket” (1979) is another example of Callis' dark sense of humor. The point of view of the photograph is from above, looking down on a bathtub partially filled with reddish water. The water drips from a wet purple jacket with pink buttons that hangs on a rack above the tub in front of turquoise colored tiles. A round drain cap with a detached chain is submerged in the pink water and echoes the shape of the buttons in the jacket above.

The who, what, when why, and even how are suggested but never answered in Callis' photographic images. What makes her work so intriguing is that her pictures are full of innuendo and possibility. Her works have a grace and formal beauty that coincides with the implied but never stated narrative that envelopes them. Over the decades Callis’ work has continued to evolve and impress.