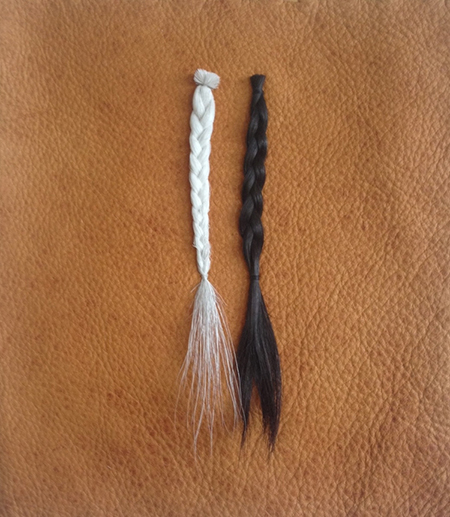 Roughly 100 years after the instigation and publication of Edward S. Curtis’ vast archive of photographs of Native Americans, six Puget Sound area art and history museums are collaborating on a series of related exhibitions to honor and critique Curtis, who maintained a studio in Seattle. Curtis was honored because of the artistic beauty of his important documents of Native Americans, and later critiqued because of his inaccurate costuming of sitters and his sharing of the widespread notion that such peoples were doomed, as in the title of his 1904 book “The Vanishing Race.”

While the Seattle Art Museum has opened “Double Exposure,” which combines 150 Curtis photographs with three indigenous contemporary artists to great acclaim, Museum of Northwest Art curator Chloe Dye Sherpe and artist RYAN! Feddersen have concentrated solely on 20 contemporary tribal-affiliated artists to both acknowledge Curtis’ controversial contribution to Native American history, but to also use his efforts as a battering ram to point out how often Curtis’ viewpoint and attitude were repeated in the ensuing century to the detriment of Native American cultures.

Half the artists are from the Pacific Northwest, an area rich in Indian heritage and the ancestral home of the Coastal and Confederated Salish peoples, represented, for example, by Neal Ambrose-Smith and Jaune Quick-to-See Smith, the latter probably the most widely known artist in the exhibition (“Untitled,” 2017). The others come from Wyoming, the Midwest, and Oklahoma, Wisconsin and elsewhere.

The exhibition earns sterling credentials in terms of tribal representation and eminently helpful and readable wall texts and curatorial statements. However, the small scale of most of the works and the overly spacious installation suggest that including more works would have been better, as well as more large works. Among the latter, Colville artist Joe Feddersen (also well known beyond the Northwest) created a spectacular hanging wall installation of glass petroglyphs, each hand-blown and suspended on strings. Collectively, “Charmed” (2013) suggests the available transparency of tribal history and language, if only it were more fully studied by the dominant white culture. Fellow Colville member Carly Feddersen’s “She Has Many Horses” (2017) hangs an oversize tribal garment in the central gallery; it is decorated with numerous horse images on medallions, symbols of wealth and power.

Amy Malbeuf, a Métis artist (a blend of French-Canadian and First Nation from Canada), braided hair from a caribou elk and set it next to a braid of her own hair, all placed upon an elk-hide in “Iamthecaribou/thecaribouisme” (2014). Its simplicity and powerful symbolism make clear the point of affinity between tribal peoples and wildlife. More abrupt, “Anti-Retro” (2017), a loud silkscreen print by Andrea Carlson (Ojibwe) recalls Pop artist James Rosenquist with its jumbled composition combining Native American signs and commercial imagery. It has a festive, extroverted look that is unlike most of the other work on view. Tanis S’eiltin made “Totems & Tabu” (2014), an installation ridiculing tourist postcard concepts and the collision of white and native cultures when American families went on vacations; much of its effectiveness lies in its humor.

Anger underlies much of the rest of “In Red Ink,” both subtle and blatant. Erin Genia of South Dakota uses ceramics and other materials for her “Facing/Not Facing: Toxic Devastation from Oil” (2016), an ugly oil spill on a wall with squared-off tribal imagery surrounding a mask-like face drenched in the stuff. Similarly, John Feodorov, a Navajo, commissioned four tribal rugs to deface in his “Desecrations” series (2017). “Desecration 1” shows three cooling towers spewing smoke next to an erupting volcano and a wolf’s head. Most closely associated with reverence for the environment, Native Americans were also the first to suffer the consequences of natural resource extractions on tribal lands. Feodorov also altered a dance sequence from the Hollywood musical “On the Town” in a video that replaces Leonard Bernstein’s score with what the artist calls “ethnic sounding music.” It is also a bookend to Curtis’ film, “In the Land of the Head Hunters,” which equally distorted representations of Northwest Coast Natives such as the Tlingit.

Quieter works like those by Malbeuf, Fox Anthony Spears and Asia Tail temper historic anger with more meditative, abstract works. The elegant simplicity of Malbeuf’s braids is matched by Spears’ “Uhraam II (pipe)” (2017) in which an elongated peace pipe with fuming smoke is set against a grid of triangle shapes that could justy as easily be a rug pattern, a fence, or even a warning sign. Cherokee artist Asia Tail created four circular panels on which symbolic scenes are painted. In “Hare Lair” (2017) three lively rabbits jump around a border of wildflowers. The welcome hiatus from harangue and tirade allows for breathing space within an overall compelling and challenging exhibition.