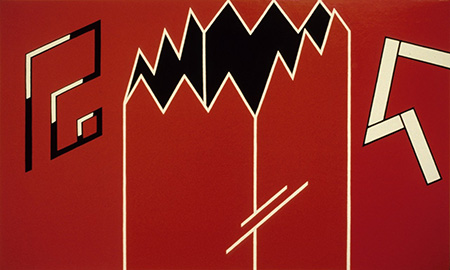 Jagged lines, geometric forms and subtle architectural references populate Joe Clower’s paintings. If the elements of his compositions are meant to relate to each other or symbolize a concept, it’s hard to decipher. But that sort of deliberate ambiguity has been Clower’s trademark over a career spanning six decades, as this survey makes clear. With a nod to the Chicago Imagists, Clower presents enamels, gouaches and watercolors that are deceptively simple, and comic in tone. They are handled with an overall flatness, but also play with perspective in his use of shadows and floating objects. Although they are vibrant in hue, each painting contains only a few dramatically contrasting colors. In addition, each canvas offers ambiguity for us to interpret, often suggestive of an urban landscape, and a futuristic one at that.

The oxymoronic “Chaos Hell of Ecstasy” (1997) is a prime example of Clower’s enigmatic world. Overlapping blocks of solid red combine with what appear to be classical Greek columns in white as well as other architectural elements, including inverted pyramids. A cluster of slightly curved pink lines with glowing white terminuses — conjuring thoughts of extraterrestrial beings — hover to the left. In the watercolor “Untitled” (2014) its four elements challenge us to make connections. Clower places a gold curlicue over a two-piece red block, a ridged aqua cylinder and an amorphous gray form that could be seen as a bust. They come together like artifacts of another place and time. “Untitled” (1980), an enamel painting, at 60 inches across is one of the larger works. It’s also one of the most eye-catching pieces, using only jagged lines, straight lines and pictogram-like elements in red, black and white. It seems spare to a point of minimalism at first look, but as we keep looking elements pop out from the red background. Clower seeks to disorient us, but at the same time he instills an appreciation for an artist’s creative prerogative to be idiosyncratic, even obtuse.