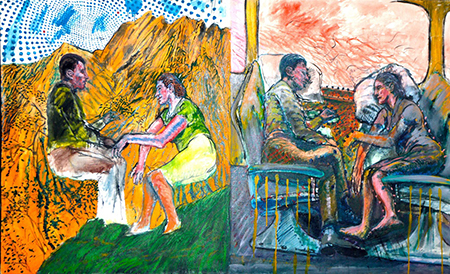 Ray Brown here exhibits works from the 1960s that, in hindsight, were adventurous and experimental for their time. When the contemporary art world was divisive in using a binary system that differentiated figurative art from abstraction (with the latter earning more critical praise), Brown was already freely interweaving figurative and abstract elements within a single painting, an approach that did not become ubiquitous until the 1980s. Originally a printmaker, Brown is one of the first contemporary painters who employed diptych and triptych formats to create open-ended narratives that emerge from interactions within unusual juxtapositions or between repeated images.

Brown has commented that his painted scenarios of the 1960s reflect his ongoing interest in “the narrative psychology of dreams and emotions,” with inspiration drawn from the stories of family members or models. In two of the diptychs, meaning derives from observing differences between dual depictions of a single or grouping of figures. In “Mountain and Railway Car” (1965), a man and woman facing each other while traveling on a train are shown somewhat naturalistically in the right half of the painting. They then appear in the left side with their feet buried in paint, but otherwise floating before a backdrop of rugged mountains and a psychedelic sky. Full of contradictions in form as well as suggested storyline, this and other works in the exhibition invite us to engage in visually intriguing, thought provoking detective work.

Two of the paintings in the exhibition include representations of women that recall the contemporaneous sexualized stereotypes in the paintings of Mel Ramos and anticipate the 1980s versions by David Salle. In “Model and Chinese Dinner” (1965), a repeated image of a naked female model served up like food on a spoon or plate is contrasted with a family dining at a Chinese restaurant. When considered within the context of the sexual revolution that was starting to take place when the work was painted, the imagery brilliantly captures the stark contrasts that existed between the liberal and conservative lifestyles of the 1960s.