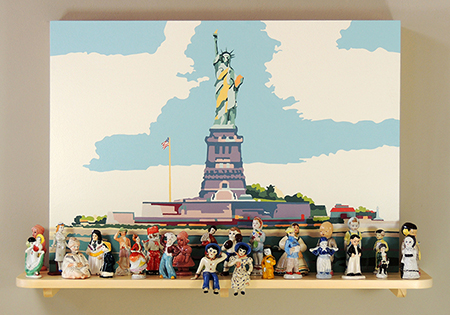 Willem Volkersz’s mixed-media tableaux are eye-pleasing works, redolent with Americana by way of road-trip souvenirs, ceramic figurines and travel postcards. Many of the found objects come from Volkersz’s explorations of mid-20th-century America, acquired after emigrating from Holland as a teenager. The frequent addition of old-fashioned paint-by-number pictures to the tableaux evokes curiosity: did the artist find the paintings, or did he deliberately imitate the style? Several of the works also incorporate neon tubes twisted into simple shapes to enhance an assemblage’s theme. For instance, in “My Trip to Yellowstone” (2017), park souvenirs surround a simple painted depiction of Old Faithful, with a white neon tube silhouetting the geyser.

One of the standout pieces in the show, “Give Me Your Tired, Your Poor …” (2017), makes it clear that Volkersz wants his seemingly ordinary bric-a-brac to wield a communicative power on a number of issues. In this case, the issue is immigration, which in today’s political climate automatically grabs attention. Here, the tableau features 3-inch-high porcelain figurines on a ledge, each representing a world culture — a melting pot, if you will. Behind the meticulously arranged lineup is a paint-by-number-style depiction of the Statue of Liberty. It’s charming and provocative at the same time. Meanwhile, “Home on the Ranch” (2018), with its ceramic deer on one side and two cows on the other in a pastoral scene, prompts contemplation of the frequent man vs. nature conflict on American farms and ranches. “Lassie and Friends” (2018), on the other hand, mines nostalgia, with a surprisingly detailed “paint-by-number” Lassie rising majestically over 14 collector ceramic dogs composed into a harmonious arrangement. We might be tempted to think Volkersz is being ironic or glib, but the more convincing takeaway is understanding how old and even kitschy found items — when sensitively handled — can shine a light on our national character.