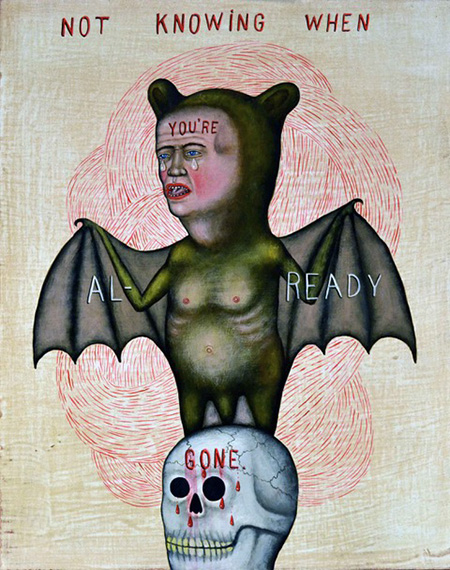 Wisconsin artist Fred Stonehouse is recognized for meticulous but stylistically quirky narrative paintings that explore various topics drawn from all aspects of life. Characteristically, his dreamlike scenarios are populated with eccentric human/animal hybrids caught in some emotionally or psychologically intense situation. Their stories are conveyed metaphorically or through the addition of painted text. Works here raise questions about a universal dilemma that most people face at an early age. In choosing our paths in life: do we take the narrow road, staying close to home and adhering to norms and expectations set forth by parents and family? Or do we leave the nest to follow our dreams?

Like most artists, Stonehouse went with his instincts and, in his case, succeeded at doing what he loves. Most of his protagonists, however, seem to have taken the opposite course. In “Family Time” a naked male crouches on the floor while carrying on his back the weight of a family tree that compresses his body. The misery of his containment, evident in the distressed expression on his face, is contrasted with the joyful freedom of colorful butterflies flying above. In “Waiting” another sullen naked male sits alone, with flowers either growing into or out of his mouth. We are clued in to his feelings of remorse by painted handwriting above him, which reads: “A great deal of his life was spent waiting. What he waited for was never entirely clear, especially to him.”

Several of the more intriguing works employ subtle metaphoric references, such as rubber bands that suggest umbilical cords and family networks, or swirling red linear patterns that bring to mind lifelines, bloodlines, and fingerprints. In “Already Gone” this latter device is particularly effective as a backdrop to a totemic arrangement of a weeping bat/human hybrid shown standing on a skull. In this image we encounter a fully resolved, convincing expression of pathos.