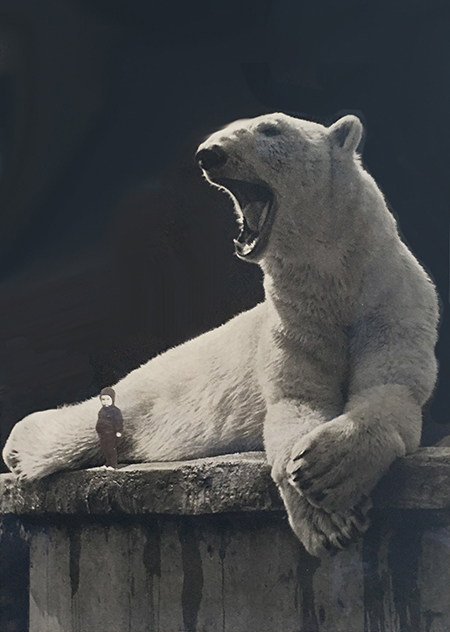 Boston-based John O’Reilly has been working with photographic montage for over 40 years whose compelling and complex work has had little exposure in Los Angeles. O'Reilly's collages are small and intimate. They require close, long viewing as they are densely layered with images and references. O'Reilly culls from myriad sources, including art history and pornography as well as his own original images. Now in his 90s, O'Reilly came of age in the pre-computer era and continues to create his works using analog rather than digital processes. He cuts and pastes his collages by hand rather than using Photoshop, which gives them a vulnerable and precious appeal.

Many of the images are self portraits in which O'Reilly inserts his presence into a historic or imagined situation, as in “Talking with Whitman” (1994). One of the earliest images here is “Self Portrait with Polar Bear” (1977), in which the artist as a small child is collaged into an image of a yawning polar bear. The animal’s open mouth is larger than the child, but it does not feel as though the child is in danger. O'Reilly has a knack for creating inspiring narratives from disparate sources.