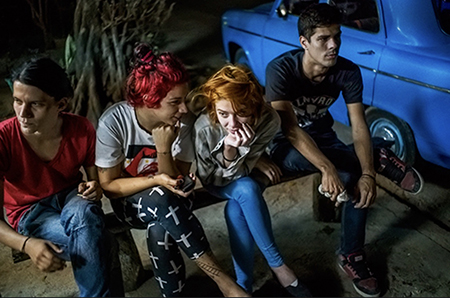 The “Cuba is” exhibit is a fine portrayal of the Cuba of today that has been under strict rule by its socialist government for decades. Referred to as ‘Latin America’s most freedom violator’ by Reporters without Borders, nothing much has changed after Fidel Castro’s death in 2016. Thus, bloggers and journalists have no freedom of speech and face drastic restrictions on the internet. The exhibit, comprised of multiple parts, has developed from that political entanglement. It offers 120 photographs, a short documentary about photographer Elliot Erwitt, musician Bobby Carcasses and singer Haydee Milanes. There is a stage set of a Cuban cafe with a virtual reality travel experience, as well as an interactive installation.

The show opens with a series of images by photographer Michael Christopher Brown that more recalls the underground nightclub scene of Berlin than, say, Hemingway’s “The Old Man and the Sea.” Hence, pictures of young people with tattoos and dyed hair are presented, hanging out aimlessly on the streets or in their rooms enclosed by their spray-painted walls. We learn that music and drugs provide them an escape from a future with few job opportunities. A bit hidden and rather towards the end of the exhibit is Havana-born artist Rene Pena’s critical series “Being Black,” which explains that racism and discrimination has not been eliminated as Castro promised. It presents the artist covered up by white lace cloth, reminiscent of a burka. Only his rouged lips and a bit of the color of his skin are visible, creating a strong contrast to the white cloth and the black background.