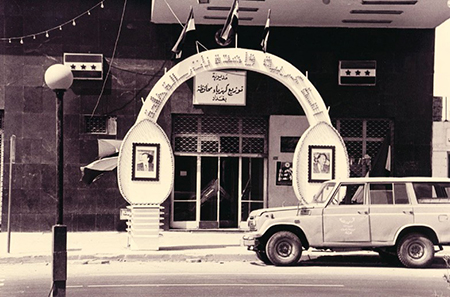 Rifat Chadirji, “741 Signs and Advertisements, 10-78-143-8: Decoration for Tammuz month (July) celebrating the revolution and the birth of the Baath party,” 1978

"Every Building in Baghdad" is a compelling and thought provoking historical exhibition of photographs of buildings in Bagdad from the 1950s-70s, during the period of its postwar modernization. The buildings were designed by the architect Rifat Chadirji who was the Director of Buildings for government agencies and instrumental in overseeing the construction of new factories, colleges, business headquarters, offices and apartment buildings. In addition to documenting the changes in the architecture in Baghdad, Chadirji also takes photographs of street life and the city's inhabitants who were soon displaced by change. In addition to photographs documenting the construction and details of the buildings made by Chadirji and those who worked in his office, the exhibition also showcases color as well as black and white photographs by Chadirji's contemporary, Iraqi photographer Latif Al Ani. These square formatted images present the new urbanization that emerged during this time period.

While the content of the exhibition is fascinating, what also stands out is the presentation. Adam Bander (who along with Mark Wasiuta and Florencia Pacheco were the exhibition curators) designed a metal structure that spans the gallery space on which many of the photographs hang. Rather than place the images on the wall, Chadirji's snapshots and photographs documenting his architecture (many in the form of annotated contact sheets) are sandwiched between sheets of Plexiglas and presented as if floating in the space on vertical arms that extend from a central core. Bander succeeds in activating the space to make the viewing of numerous photographs both challenging and enjoyable