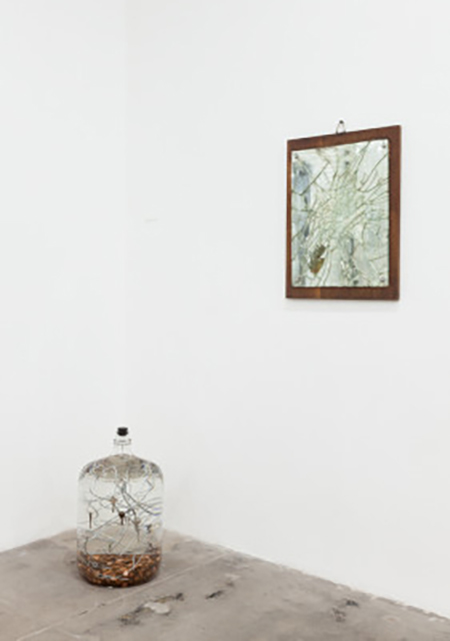 Organized by veteran freelance curator Bob Nickas, “Strange Attractors: The Anthology of Interplanetary Folk Art, Vol. 1 Life on Earth" is a packed but very strong show including over 40 artists that probes how to curate art-filled time capsules for the greater universe. As Nickas writes, “This show attempts a first step, to be followed by others, towards compiling a visual record of life on Earth, never to be definitive, always speculative in the best sense...” With two or more works by many of the artists, there’s a lot to take in here.

The most effective as well as satisfying route to consuming the show’s theme is by circumnavigating works in the main space in some form of sequence, where standouts include Josh Tonsfeldt’s discombobulated flat screen TV, sculptural wall piece and pigment print of a monkey gazing skyward and perhaps beyond; multi-decade conceptualist Stephen Kaltenbach’s "Personal Appearance Manipulation" print and steel “Contagion" time capsule; Lazaros’ animistic terrarium vitrines (one is titled “Hex for obtaining tokens of the 777 astral plane portals”); and Isabella Kirkland’s painting “Nudibranchia (multiple rows of various sea slugs)," to cite just a small slice among works that consistent intrigue.

Torbjorn Rodland’s “Intruders," a black & white photo featuring drawings of stereotypical extra-terrestrials covering an expanse of wood floor, is an amusing and spot-on take on what we perceive about the great beyond. Abstraction is also well-represented, anchoring Nickas’ premise to be fully inclusive, and at the same time lending abstract imagery a decidedly cosmic bent