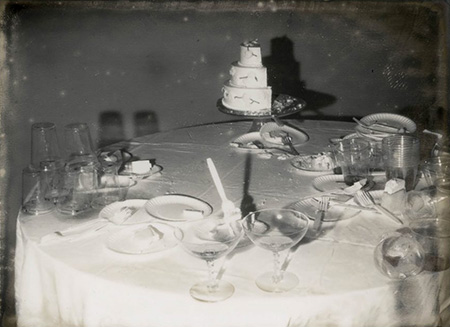 From 1997 to 2008 Chicago-based photographer Laura Letinsky used Polaroids for small scale studies in preparation of her major bodies of work. Expectedly, these little “sketches” embody the characteristics that permeate her main practice: domestic spaces populated with wilting flowers, discarded food, dirty dishes, within blank voids as backdrops. And while her major series have evolved to become sleek, conceptual images that challenge our sense of perception with layers of photos-within-photos, and spatially boggling planes and surfaces, the Polaroids in "Time’s Assignation" reinforce Letinsky’s underlying relationship to the familiar.

With their black-and-white palette and visibly seeping chemicals, the Polaroids are tinged with nostalgia (as is typical of the medium). The spaces within them, while still rather anonymous, feel real. The kitchen countertops and clothed dining tables with their browning apple slices, crumpled paper plates and leftover cake covered in Saran Wrap are certainly as staged as everything else Letinsky’s does. But the immediacy of the medium here reinforces a narrative. The Polaroids each capture a moment, albeit these are the unhurried moments that take place after the dinner or party is through, with the stuff left in the aftermath being that which has just as much to say.