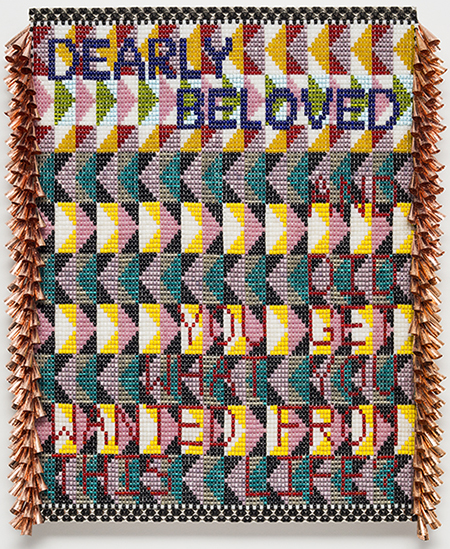 It’s been quite some time since an artist has incorporated text into their objects as effectively as Jeffrey Gibson. Embedded deeply — visually and physically — into dense multi-media wall works, you get a hefty dose of visual intrigue. It's an aesthetic that encompasses folk, Native American and mainstream sensibilities — along with the messages. And this point can’t be overemphasized, the text is generally readable but sometimes challenging to make out. The effect is to deepen the viewing experience. The exhibition’s title, “IN SUCH TIMES,” comes from two appropriate sources of provenance: originally from writer Nelsen Algren, who wrote “In such times, clowns become witnesses” (which is also the title and full text of one of Gibson’s pieces); and then from the 1960s master of text in art, Sister Corita Kent, as used in her serigraph “Everything but The Circus.” Along with his deft use of text and language, Gibson is also a wise title-er. “Like a Whisper" takes the horizontal fringed piece that reads “REVOLUTION” forward at the top, backwards at the bottom, with tricky-to-read words sandwiched in between. “DEARLY BELOVED … AND DID YOU GET WHAT YOU WANTED FROM THIS LIFE?” offers a more legible script, if you will. In addition to the folk-meets-contemporary aesthetic, there also is the visual language of embroidery, a craft of both the homemade, and, one could argue, the flyover states. That visual and geographic reference couldn’t come at a more timely moment than “Such Times” as these.