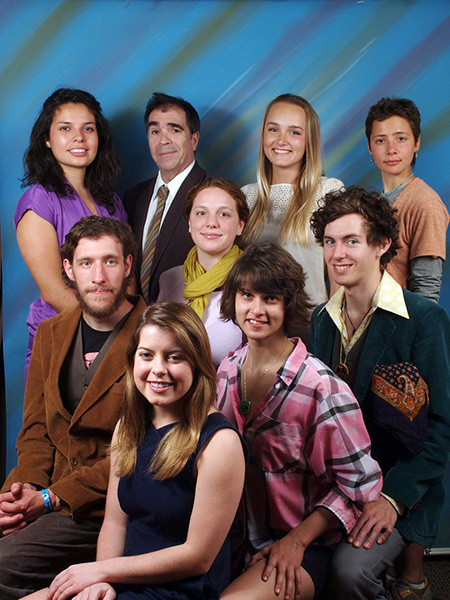 In "Learning from Youth," Michael Smith lends his inherently comical mug (and body) to a series of class photos and two videos. The main gallery wall is filled salon-style with 53 framed photos that make up the project “Sears Class Portraits,” which was begun in 1999 and features group photos of college-aged students shot in classic studio portrait style. Smith lurks Where's Waldo-like in each one, with a smile and perhaps an eyebrow raised just so. Though the group portraits are in fact derived from the art classes that he's taught over the years, they may as well be random classes or groups that Smith has interloped, so starkly comical is his divergence.

It's a shame that the photos aren't installed side-by-side and chronologically, providing full witness to the changing styles and trends in step with Smith's own gradual aging and relative lack of style changes. Presumably the spatial limitations of the gallery simply don't allow for such expansion (along with a rationale that perhaps the viewer "gets it" by simply witnessing a portion). Smith's video “Portal Excursion” (2005-07) proffers a more expansive platform for the artist to showcase his deadpan style, this time as an earnest student looking to keep up with the expanding career marketplace by enrolling in a series of correspondence courses. While the production values may be a bit wanting and one may struggle to stick with the plot, Smith's perennial Everyman is so comically sound, like a Buster Keaton for video art, that there's never a shortage of pathos-comical moments to keep you on board.