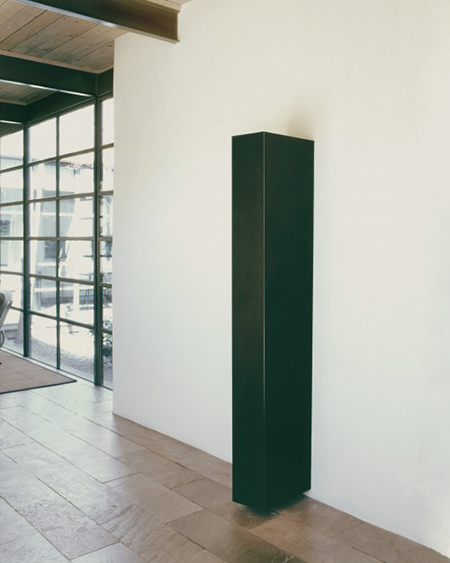 It's safe to say that the art world literati spent even more time obsessing over the color black than usual this month, thanks to Anish Kapoor's exclusive artistic license on the world's darkest pigment. Vantablack is composed of microscopic carbon nanotubes and absorbs 99.965% of visible light, turning any surface it touches into an unsettling void. Lest you believe Kapoor has an aesthetic monopoly on ambiguously dark materials, behold Susan York's manipulation of a much humbler variety of carbon. York's cast graphite rectangles hover in the corners of the O'Keeffe Museum, their highly polished surfaces soft and cloudy but also, somehow, evocative of dangerous depths. Stare long enough and you'll sense subtle asymmetries in the stark geometric forms. Their sharp edges curve almost imperceptibly, like a high desert horizon line.

Curator Carolyn Kastner links York's sculptures and drawings with paintings and sketches by Georgia O'Keeffe and photographs by Alfred Stieglitz. The first historic touchpoint is O'Keeffe's 1920's architectural series, which depicts the skyscrapers of New York City as spare black-and-white boxes. "Untitled (City Night)", a study from the 1970's that mimics a 1926 composition, could easily be a literal painting of York's works rather than an abstracted version of a city canyon. Stieglitz's "Equivalent" series from the same period presents dark visions of cloudy skies that match the lustrous texture of York's sculptures. Later O'Keeffe paintings referencing New Mexico architecture engage York's contributions even more closely. A dark window from O'Keeffe's Abiquiu house appears over and over, finding echoes in York's densely layered graphite drawings.

The connections are at times flagrant in a way that overshoots either artists' intentions. If you want to meet York's direct ancestors, look to Donald Judd or Kazimir Malevich (case in point: York's "After Malevich", which is tucked in the back corner). However, a stroll up Johnson Street and across Grant Avenue to the front lawn of the museum's Research Center offers a final —and most exhilarating — argument for O'Keeffe and York's affinity. O'Keeffe's late period monumental bronze “Abstraction,” composed as the artist was slipping into blindness, is the curvy, modernistic sister to York's minimal pillars. Forget their actual mediums; these women sculpt with shadows.