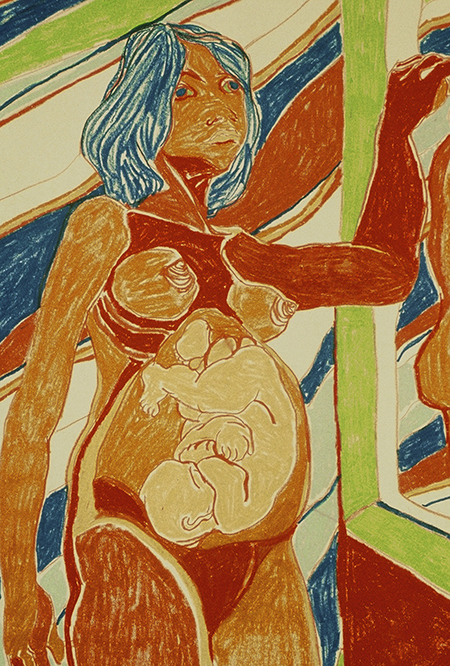 “A mother speaks to her children through generations.” This quote by Terry Tempest Williams, printed on the first page of Helen Redman’s catalog to her exhibition “Through a Mother’s Eye," distills the essence of Redman’s work as an artist. Redman’s art is boldly expressed through the lens of herself in relationship to motherhood and grandmother-hood. Rather than hiding her gender as many female artists of her generation have done, Redman faces it all head-on. Both her identity and life challenges as a woman and mother take central stage in her paintings and drawings in this retrospective exhibition. For Redman, her role as an artist is inextricably linked to her family as she documents the stages of pregnancy, birth, grief from the death of a child and the growth of her children and grandchildren at various points into their adulthood.

Redman began her “Lifeline" series in the early 1960’s. Her expressionistic style of drawing and painting has remained consistent throughout the years. Her use of color, form, shape and patterns provide us with visual clues about how Redman was feeling and thinking as each work was created. Using a range of media — pen and ink, oil pastel, acrylic and oil paint and mixed media, on surfaces ranging from paper, canvas, to wood — Redman’s figurative works also tackle the female experience through stages of menopause and aging. Though Redman’s work has discernible connections to Frieda Kahlo and Alice Neel, hers is more insistently intimate and personal, a life-chronicle through which we, as women, see something of ourselves.