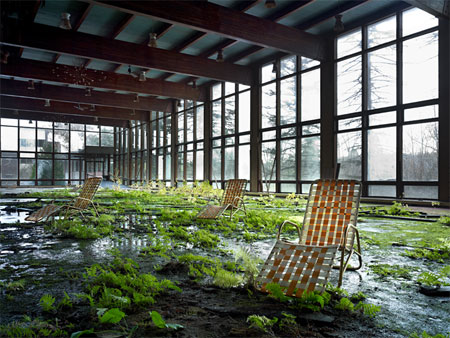 As with previous work, these images were recorded using only natural light, and the venues were photographed as they were found. Westerhout doesn’t stage or alter anything. People and animals are wholly absent, further emphasizing that these spaces have been left behind. What Westerhout deftly captures is the poetic, quiet beauty of these forgotten spaces; they inspire contemplation about the passing of time, changes in society and economy, and the decay of spaces once useful, vibrant and grand.

Westerhout is not alone in her fascination with this subject. An easy and immediate comparison can be made between her work and that of French photographers Yves Marchand and Romain Meffre, whose series — shot between 2005 and 2010 — and accompanying book “The Ruins of Detroit” even captured one of the same venues Westerhout focuses on, Motor City’s Lee Plaza Hotel. And it is here that we find one of the outstanding pieces of the show, “Lee Plaza Hotel, Detroit I.” It features a view of a room — perhaps taken from the doorway — in the hotel with a sagging, formerly white couch facing us, and two busted-out windows, one behind the couch and one to the left. Broken glass covers the floor. Through the window holes is a view of the city. We are three, maybe four, stories up. The sky is grey, but there’s light — an inviting scenario of failure and hope.