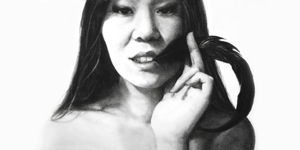 Kent Williams has built up a formidable reputation as a powerful contemporary figurative painter. His is a bold realism with combined attributes of abstraction and neo-expressionistic sensibilities. His work is characterized by strong gestural forms combined with areas of arresting detail, rendered with rich dynamic brushwork. A graduate of Pratt Institute in New York, Williams, a consummate draftsman and painter, has realized his work through various other artistic channels as well; that of the illustrated word and the graphic novel (including The Fountain with filmmaker Darren Aronofsky), printmaking, photography, design, architecture, and film.

Jason Shawn Alexander is an expressionist figurative painter, whose intimate works penetrate to the core of human integrity, often depicting images of figures wrenched in that critical space where the strained coordination of mind, body, and spirit, hangs in the balance of existential woe.  Alexander's work has been the subject of number of solo exhibitions, including the Corey Helford Gallery, Culver City, CA, and 101/exhibit, Miami, FL, where he is currently represented.  In 2009 his portrait hung in the Smithsonian National Portrait Gallery, Washington, DC.  His work is collected both in the US and abroad.

Kevin Llewellyn is a Los Angeles based artist painting dark, realistic works that are primarily figurative. He has exhibited, taught, and lectured around the world, including The Butler Institute of American Art, where Llewellyn had his first solo show at age 21. The following year Llewellyn was invited to work with the Forum Gallery in New York and Los Angeles, exhibiting with such artists as Lucian Freud, Steven Assael, and Odd Nerdrum.  Llewellyn's recent solo exhibition at Kat Von D's Wonderland Gallery, "The Unsaid" was on display for 567 days and was featured as the season finale for the TV show LA Ink. Collectors include Madonna, Trent Reznor, Mark Romanek, Kat Von D, The Getty Private Collection, The Williams Collection, Nikki Sixx, Nancy Berry, Ville Valo, Billy Howerdel, The Butler Institute of American Art, The Arkansas Art Center Museum, Guy Ritchie, and Alan Moulder.

Brandon Boyd found creative expression at a very early age, and although he was not formally trained, over the years he has developed his drawing habit into an inextricable part of his life. Brandon is the author of two books combining his artwork and creative writing; White Fluffy Clouds (2003), and From the Murks of the Sultry Abyss (2007). Ectoplasm (2008) was his first exhibit of visual works, which received international acclaim.  Brandon combines his worlds of music, art, and activism and has collaborated with brands such as TOMS Shoes and Hurley. In the spring of 2011, he created a massive mural at the Hurley Space Gallery and created a series of original t-shirt designs in an effort to raise awareness about single use plastics and their harmful effects on the ocean. Parts of the mural have since traveled to LACMA and The Museum of Monterey where Brandon appeared this past December to speak about art and activism.

Suzy O’Mullane is known for her evocative representations of intense love and loss. Her recent work has evolved to include forms, in the shape of hares, wolves, flowers, birds, and female figures, as metaphors of her experiences. Drawing on personal, historical, and mythological references, these characters assist the artist in developing a visual language that goes beyond mere recording of her personal experience. O’Mullane has been awarded several residencies in Cill Rialaig, Ireland, Paris and Berlin as well as several prestigious commissions. O’Mullane has exhibited in private and state-funded galleries in London, Berlin, Italy, America and throughout Ireland, as well as been exhibited at international art fairs including Art Chicago, Art Palm Beach and Art Miami.

Kikyz 1313 received her BFA at the State University and had her first solo exhibition Cadáveres Esquicio at the Museo de la Ciudad de Querétaro (State Museum). Kikyz also received her first state recognition during this time, being honored with an artist residency at the Nordiska Akvarellmuseet (Nordic Watercolor Museum) in Skärhamn, Sweden. During her residency, three of her pieces were selected for the National Biennial exhibition ArtEmergente, in Monterrey, México. Kikyz was recently awarded with an art scholarship by the state of Querétaro (IQCA).

Simon McWilliams trained at the University of Ulster and then at the Royal Academy Schools in London. An award winning artist, his paintings can be found in many of the major collections of Irish Art today. His works are very much a painter's way of describing one's surroundings; allowing richly textured layers of paint and design to construct, shape and inform every aspect of the picture resulting in a tactile and forthright vision of a time and place. While the primary inspiration is his experience of urban settings, he equally enjoys uniting human elements within these environments, reminding us of our unconscious relationship to the buildings around us.

Rodrigo Cifuentes was born in Jalisco, Mexico to Spanish descendents who immigrated during the 1930s. Growing up in a violent landscape shaped his pictorial temper. He further developed this at the National School of Painting, Sculpture and Graphics; La Esmeralda (ENPEG) in Mexico City. Cifuentes’ work first permeated the public arena in 2001 when he was selected for sponsorship at the Mexican Art Festival Expresarte, today his works are also part of the Secretaria de Hacienda y Crédito Público Museum Collection. As an emerging Mexican artist, Cifuentes analyzes the dichotomy of the Latin American myth and the American dream in his society. The deafening presence of an expressionist scream speaks to that social discontent, approaching such subjects as the unreachability of the American dream, loss of innocence, and mass consumption.

Tanmaya Bingham exhibits both nationally and internationally. Her work investigates the mechanics of human dynamics and the neurological processes that create patterns in our daily lives, Her focus being the psychological, sociological and genealogical patterns that occur within the context of herself and her immediate circles. Although the content of Tanmaya’s work is highly personal, the themes are universal and in choosing herself, her family and friends as her primary subjects she illustrates her belief that we learn through example and the stories of others.

Ketut Kusuma (Kei) is a graphic artist currently based in Indonesia. Kusuma is self-taught which has given him a unique “ability to perceive things in accordance with his own views” when it comes to creating his pieces. Most of his influences can be traced back to his childhood growing up watching various Japanese movies, animation, and other foreign literature. Kusuma has been featured in Catapult Magazine, and the Indonesian fashion label Dynchav featured his work on their debut line The little adventure of Bunny girl. In 2007 Kusuma took 2nd place in the IDEart competition by Institut Teknologi Sepuluh Nopember (Surabaya, Indonesia), and in 2008 he was a finalist in the Converse Chuck Taylor design competition. Kusuma has participated in group shows in Indonesia, America and the UK

Black Em graduated from UCLA with a degree in design/media art and followed that by attending the American Film Institute as a production design fellow. Her continued work in cinema allowed her to explore narrative story telling, as well as create and build sets, props, and costumes. Her various work amalgamates into a happy balance of fine art, graphic design and narrative structure which manifests itself in her illustrative work. Currently she is illustrating a graphic novel for Archaia Comics, and illustrating a short for the “Occupy Comics” Anthology.

Anna Ataeva is a multi-disciplined artist with an extensive education, both academic and practical. She first attended the School of Oriental Arts in Moscow and the prestigious Moscow Fine Art Lyceum. Anna received her Masters in Fine Arts from The State Academic Fine Art Institute of Russian Academy of Arts (Moscow), where she studied and mastered multiple painting and drawing techniques. Anna’s artwork has been published and reviewed in The encyclopedia “The Brilliant Europe" (Russia and Europe); Art Almanac “The Most Important Russian Artists" (Russia); Art Newspaper “Isograph" (Russia); Art Journal “Kultura" (Russia); and featured on the television program “Cultural News" (Moscow, Russia).

Zoetica Ebb is a Russian-born Los Angeles artist, photographer, writer, and stylist. In 2006, after years of running her art blog, Zoetica began writing a successful online fashion column. In 2007, she co-founded Coilhouse magazine – a web and print publication dedicated to all aspects of alternative culture. In 2010 she designed a mini-fashion-line and ran a sweeping Kickstarter campaign that sent her to teach and create art in the Amazon jungle. She's currently splitting her time between shooting and writing for RedBull's ChinaShop Magazine and working on a new series of works.

So Youn Lee was born  and raised in South Korea, and moved to the United States in 2008 to attend the Art Center College of Design in Pasadena where she is still currently enrolled. Lee’s focus and interest is primarily Surrealism and human behavior, exploring the individual balance between presence and absence, believing that art should deliver unique experiences to the audience that alters their perceptions of the world and of life. Lee has participated in three group shows so far this year; Line weight and Look At This, Look At That at the Nucleus gallery and laluzapalooza at La Luz De Jesus gallery

Christiane Shillito was born and raised in Newcastle, England (or more accurately, at the end of Hadrian's Wall) but nowadays is based between London and Los Angeles. Here she spend a small amount of time pretending to work and the rest of her time in a fantasy world full of circus freaks, medical curiosities, vaudeville artistes, mad scientists, sky pirates, dragons, time-travelling explorers and wayward Victorian girls. Christiane is probably more known for her modeling and stage performance work under the name Ulorin Vex. In April 2008 Christiane became a member of the Bloody Crumpets and joined Emilie Autumn on stage on her European Asylum Tour.

Aubin Crowell is an artist, designer and builder living in Los Angeles. He received a Masters in Fine Arts from the San Francisco Art Institute (1995) and taught in the department until 1997. Aubin’s background includes years as an art director and scenic painter in the film and television industry. His work is also heavily influenced by his extensive experience restoring, rebuilding, and redesigning buildings throughout Los Angeles County. His work has been in several group shows through out California and in private collections. He currently lives in Silver Lake in the house he designed and built, with his wife Florice who is a designer and stylist, and their animal menagerie Monkey, Shy Girl, lil’Pi and Ninja.

Skotia Gallery first opened its doors in the Santa Fe Downtown gallery district (New Mexico) in 2008, making a huge impact on the city’s contemporary art scene. Departing from Santa Fe’s reputation for regional southwest art, Skotia Gallery focused on artists from around the globe. Emerging and mid-career talent from Israel, Mexico, Iran, India, China, Northern Ireland, Japan, and the US create a unique atmosphere of worldly sophistication that attracted contemporary art collectors from across the country. After over two years in Santa Fe, Skotia relocated to be part of the active art scene in Culver City. In a completely renovated space located at 6144 Washington Boulevard, Skotia Gallery hosts a roster of international and national artists. 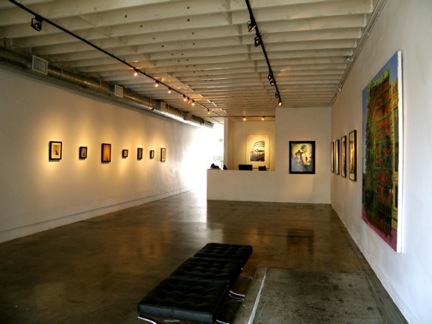 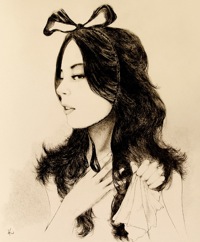 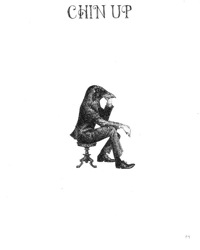 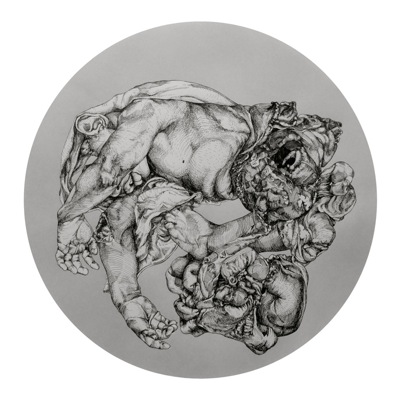