Born of Fire: The Pottery of Margaret Tafoya

plus Re: Generation: A Survey of Margaret Tafoya’s Descendants

This unprecedented exhibition of pueblo pottery will provide collectors, students and the public a unique overview of one of the most accomplished potters from the 20th century as well as of her descendants. Margaret Tafoya (1904-2001), a matriarch of Santa Clara Pueblo potters, was one of the pioneering artists who sustained the ceramic traditions of her ancestors by transforming it from a process for making functional vessels to an art form. Drawing inspiration from the ceramic tradition of her ancestors, Tafoya created large, polished wares that are simple but elegant, reflecting a harmonious union of history and modern aesthetics.

New Mexico has been home to the Pueblo culture and its ancestors for centuries. Their pottery tradition, dating as far back as A.D. 500, demonstrates the craft’s importance to Pueblo identity. Such was the case for Margaret Tafoya, the daughter of well-known Santa Clara Pueblo potters who awakened her to the value of tradition.

Tafoya used local clay and the age-old techniques of coiling and wood-firing. In addition to honoring ancient customs, her pottery is equally germane to modernity. Her red and black wares are highly polished and often bear little decoration, save for a recurring incised bear paw, a trademark of the Tafoya clan. For Tafoya, clay has a spiritual presence that can sense the virtue and history of the potter. In her words, “You have to have a good heart when you sit down to make this pottery; you have to live a good life. The pottery knows.”

Re: Generation: A Survey of Margaret Tafoya’s Descendants will highlight stellar examples of work by Tafoya’s children and grandchildren who continue the ceramics legacy. They include Shirley, LuAnn and Lee Tafoya; Mary Ester Archuleta; Virginia Ebelacker; Toni Roller; Jennie Trammel, and Mela Youngblood, among others.

Reception and book signing:
February 8, 2013, 6-8:30p.m.
Charles King will be signing his book “Born of Fire: The Life and Pottery of Margaret Tafoya.” 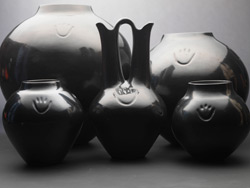 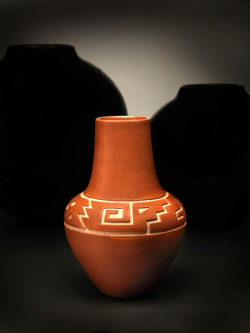 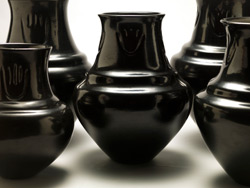