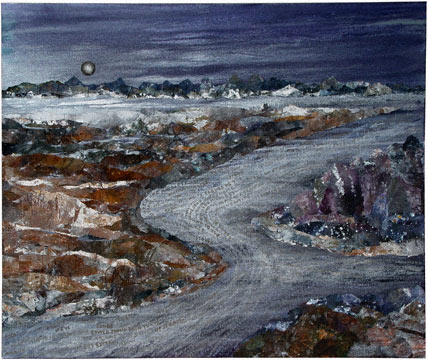 Beth Ames Swartz, "Only the mindless waters remain" from "The Thirteenth Moon" series, 2008, acrylic and mixed media on canvas, 60" x 72".

In the midst of today’s vicious religious, racial and political schisms, Holocaust deniers, terrorism domestic and international, the art of Beth Ames Swartz offers a spiritual retreat. The placeless and timeless work of this artist allows her art to transcend ordinary strife and yet address the anguish of the world. The viewer feels grounded and calmed by an art that is never non-objective but addresses abstract spiritual and universal concepts.  The mixed media paintings are substantial, material and even sensuous in a display of exquisite surface and muscular facture. Shapes and colors in her early works are brought to the limits of decryption and fall into abstraction. In her later work, her use of words as formal elements and her direct references to very specific ideas brings the images to a dangerous brink of direct illustration. The artist moves fearlessly within creative impulses that have been historically hunted from art: beauty, spirituality and poetry.

Like many of her generation, she was educated in traditional fields for women, child development at Cornell and art education at NYU. It is possible that the universal nature of Swartz’s art can be traced from when, as befitting a woman of that time, she obediently followed her husband across the country to his job, leaving the cultural roots of her native New York City for the unfamiliar landscape of Phoenix. Her journey was a transformational one. Displaced, she began her life as an artist, cautiously responding to the unfamiliar desert landscape.

Unlike New York City, this is unmarked land that demands a profound and original response.  Under the big sky, parochial and provincial identities are suspended in favor of an all-encompassing spirituality. Swartz had to relearn how to experience her surroundings. Little has been written about her artistic training, which seems to be confined to lessons at the Art Students’ League three decades before she began showing professionally. The odd gap in the discourse leaves unexplained how this artist suddenly emerged with an apparently natural facility for abstract painting, a highly developed sense for color, and a feel for media. Subsequent writing on Swartz has emphasized the potpourri of ideas that engendered her work--Carl Jung, Alan Watts, Native American cultures, the I Ching, and the Cabala. But to focus on the philosophical systems tends to obscure the art.

Swartz debuted in the mid-Seventies with a collection of acrylic abstractions that are reminiscent of the early watercolors of Georgia O’Keeffe.  Strong as the resemblance might be, O’Keeffe never moved to abstraction, while Swartz was very comfortable with pure form. Her early abstractions played with wet in wet free-form shapes, occasionally punctuated by her neat slanted signature. Although these initial paintings were small and intimate, her work began to grow in size as her range of media expanded through the Eighties. Working with fire, earth, candle wax, gold and silver leaf on layered paper, she produced a beautiful series of mid-sized works. A few shapes fashioned by Swartz seemed to be expressions of feminist vaginal imagery.

Her post-millennial work is far more figurative and less allegorical. It is also more direct in its references to spiritual ideas. “ Word in Paint” is a collaborative work between the artist and two T’ang Dynasty poets, Du Fu and Li Bai. Chinese art has a long tradition of a call-and-response-relationship between painters and poets. It was quite common for scroll paintings to be bordered with calligraphic poems or comments or marks of ownership. Perhaps to Western eyes the blending of word and image appears seamless because, to us, Chinese writing is a collection of pictographic marks that form shapes. Swartz returns to this historical interaction, going back to the roots of a Golden Age in Chinese art, by creating small works, suitable for intimate viewing and reading. The words of the poems are embedded in the paintings as calligrams, uniting East and West, T’ang art and Cubist poet Guillaume Apollinaire, in a post-9/11 demand for a spiritual response to a world gone all too wrong.