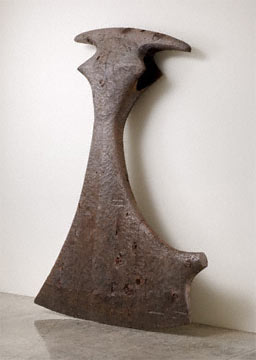 Hurricane Katrina had its way with a lot of artists. A community was decimated. People were displaced, confused, dying.  We Americans couldn't explain away this disaster as a lack of planning by some Banana Republic because it was our own government, failing profoundly. The hurricane became a serious reminder of just how mortal and subservient we are to that larger and more powerful something that can take us away in an instant. It made art-making seem an extravagant indulgence.

But art does find its way back, and artists respond in the ways they know how. For Ben Jackel, that has meant a body of work about the processes of preparedness and emergency and the communities involved. Jackel creates fire axes, war ships, fire extinguishers, fire hoses, helmets. . . and angels as exquisitely rendered perfect feats of trompe l'oeil.

The war ships are part of the series “Miles to Go Until We Sleep,” in which seven naval destroyers are displayed along a gallery wall. Each succulent black clay vessel re-imagines an original warship from the Battle of Leyte Gulf, the largest naval battle of World War II. Imagine a huge vertical 'Battleship!' game. Yes, all the cannons are movable and can be repositioned, for war may be hell, but it is most certainly a game.

There is game and sport involved in much of Jackel's work, as well as brotherhoods and communities, rules, and structures. These are all models by which civilizations navigate their way. Another large work is called “Syntagma.” It is an installation of 256 unique 6 inch-high Greek warriors created from clay, each holding a turgid metal-tipped mahogany spear. Jackel knows that conflict and aggression are sexy. These are all fetishized objects that have been labored over, delicately caressed with beeswax until they have a skin-like warmth.

It is often suggested that the major goal of trompe l'oeil is the act of rendering an object useless, but here the act of our endless preparations is shown to be futile. We are never fully prepared. We can hold back neither decay, nor destruction, nor death. But the incredible intensity that Jackel applies to his labors as he polishes and cradles his work indicate that he has accepted this and thus integrated it into his aesthetic. Jackel is not merely creating, he is soothing.