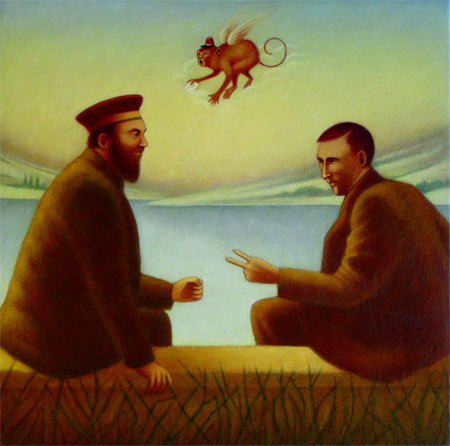 A retablo is a devotional painting, generally associated with church traditions and Latin American folk art. The ritual object provides the title of Bay-Area painter Dana DeKalb’s current show, as well as names one of the triptychs in it. The spirit is pure and direct, and it ends up being all flinty Americana, even given that quoting multicultural and historical, at times deeply historical precedent occurs purposefully throughout the body of work. Such matters as Greek mythology, explicitly quoted in “Calling Shore” and “Actaeon,” may no longer be an essential part of a classical education, but the stories are ripe for a contemporary reinterpretation in DeKalb’s aesthetic universe.

The fact that her images appear quaintly archaic, but are psychologically attuned to the present moment is a signal achievement. The illustrational naturalism attached to the human figures and pictorial space is always clear and rhythmically measured like a drumbeat. Landscape, objects and animals tend to be more formal and stylized, calling to mind the likes of Hokusai (as in the sea and fish of “Calling Shore”) and Rousseau (“House Keeping”). Her birds blend the brittle realism of John James Audubon with the flat profiles of ancient Egyptian tomb painting. Her natural inclination, however, is to keep the eye and mind firmly planted in and integrated pictorial space. If you undertake a journey through space and time with these images, don’t expect to accumulate a lot of air mileage credits.

More than art about art, there is a distinct component of topicality readily apparent in works such as “Bait” and “Passing Impasse.” The former flanks two mazes, a hedge and a floor (some medieval cathedrals in Europe employed such floor mazes, requiring pilgrims who may have already walked hundreds of miles to complete the journey to their Lord on their knees) to either side of a prone female figure; one’s gender informs whether you regard her as the goal or as engaged in a dilemma of choice. The latter image of two gents seriously engaged in a simple game of Rock, Paper, Scissors features a winged monkey, something of a stand-in for a Botticelli putti, at the apex of a brown, triangular composition. The not-so-celestial delivery boy sports a cap, an envelope in his right hand, and an expression of vast urgency on his face. Engrossed as they are in their game, the pair of negotiators express oblivious indifference to the messenger.

If it is a virtue that art slows one down and forces us to ponder, these diminutive paintings are well designed to accomplish that. DeKalb is no reductivist, but she is economical, her visual elements presented with care and restraint. Even in her triptychs each panel stands alone. By isolating these segments she undercuts the relationships ostensibly being built within the total image. To return to “Actaeon,” the Greek hunter who inadvertently stumbled, to his ultimate grief, on the naked Diana, DeKalb’s clothed woman is smirking without the slightest hint or shock. The wall of behind her features a primitive sketch of the stag Actaeon would become. The male figure climbing in the open window in the left panel, hardly the image of a menacing intruder, is witness to both the smirk and a pack of dogs playfully engaged on a rug placed in the central panel. The tone is one of mockery rather than impending tragedy. By referencing the original tale so explicitly we are left to ponder how our cultural language is used to infuse narratives that have long since lost relevancy with the contemporary psyche. The character of DeKalb’s art is not insistent, but her gentle nudging is persistent and surprisingly persuasive.