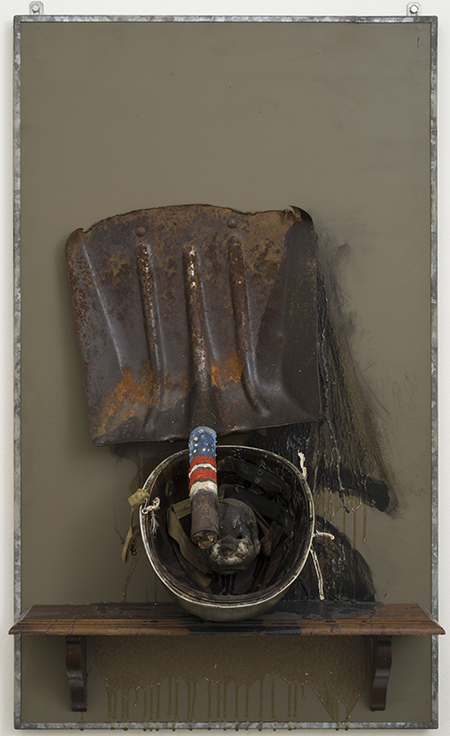 When Charles Dickens wrote these words 158 years ago, he was referencing the social ills, income disparity, political intrigue, class distinctions and hypocrisy of Paris and London. How very contemporary these sentiments seem today. And they are an apt introduction to the ever-current political assemblage and installations of Edward Kienholz and Nancy Reddin Kienholz. The earliest piece shown here, “The Non War Memorial” (1970) dates from before Kienholz collaborated with his wife Nancy. Grimy, dirty sack-like uniformed bodies are strewn on the mottled wood floor, near a pristine white cube on which a book containing 50,000 images of dirt-filled uniforms is encased in glass. Two small, framed pictures are on the wall — one just announces "The Non War Memorial" and the other is text. The whole piece feels sad, abandoned and useless. Kienholz’s poetic and pointed use of found and constructed objects evokes sharp emotion. After 1972 the Kienholz's moved to Berlin and their creative collaboration took off.

“The Jungen” (1977) is a startling piece that incorporates snapshots of Nazi-era soldiers in boot camp and with their wives and families. Gleaned from flea markets, the images seem almost sweet and nostalgic until one notices the insignia on the uniforms. Jungen translates into “boys” and also can mean the offspring of an animal. Compared to the visceral messy quality of earlier works, this assemblage is restrained and spare. There are five flat metal structures affixed to the wall — evenly spaced, all with vintage snapshots from German families’ photo albums. Each work feels somewhat like a fireplace mantle piece where people place their treasured keepsake memories. Almost like an altar.

It is only the middle piece of these five that has elements that move past the borders of the metal rectangle and reach the floor.  Inside this metal rectangle is a gilt-framed wedding picture of an SS officer and his new bride. A plug is attached near the man’s heart. A wire dangles from it. The wire is attached to a broken statue of an almost nude athlete whose right hand is raised in a gesture readily construed as the Nazi salute. This arm is broken off, which suggests multiple meanings, none of them good. He stands on a small plastic platform as if receiving accolades (reminding us of the 1936 Olympics held in Berlin). The wire continues towards the floor where it is attached to a broken light bulb. One cannot help but think of the doomed Nazi sense of exceptionalism and their belief in eugenics to keep their race “pure.”

Another of the panels is almost empty. Perched on a small wooden shelf is a framed picture of a group of uniformed soldiers relaxing in front of their tents. They wear a variety of expressions from worried to tense to cocky. To the left, tucked behind a heavy metal frame, is a small photograph of a two women and a boy. They are the family left behind by the soldiers who are gone and may never return. The whole composition and each individual piece speaks to unimaginable loss. All is broken, and the light has indeed gone out. The artists’ sympathy towards the soldiers of the Third Reich and their effort to make the viewer focus on the person not the uniform is risky even today.

In “Still Dead End Dead 1,” (1987), Kienholz (in 1972 Kienholz officially declared that all of his work from 1972 should be considered co-authored by his wife Nancy Reddin and collectively they should be referred to as “Kienholz”) return to their earlier dark, foreboding and confrontational imagery. The format of the metal rectangle and small wooden shelf is similar to “The Jungen," but here a large, broken and rusted shovel with a painted American flag wrapping around the handle is situated on a helmet with a battered and charred doll’s head. All is dirty and decaying, smeared with paint and resin. This is a pointed image of the remnants of war.

Its companion piece, “Still Dead End Dead 2,” expands on the theme. The encrusted black-enameled square has a row of what look like cookie-cutter metal crosses. All are painted black except two. One is situated in what might be a doorway, with light coming from without. The other is in a crudely painted building, meant to suggest a house of worship. A hastily painted American flag flies in darkness. A broken and rusted metal piece becomes a makeshift reliquary for a sculptural child’s head. This is vintage Kienholz, and still resonates with its outrage at the futility of war. Edward Kienholz said, “I mostly think of my work as the spoor of an animal that goes through the forest and makes a thought trail, and the viewer is the hunter and follows the trail. At one point the trail maker disappears. The viewer then is confronted with the dilemma of ideas and directions.” Over the decades, some of the work has lost its power to shock, yet there is still plenty of passion and fire that transcends the topics of that time.