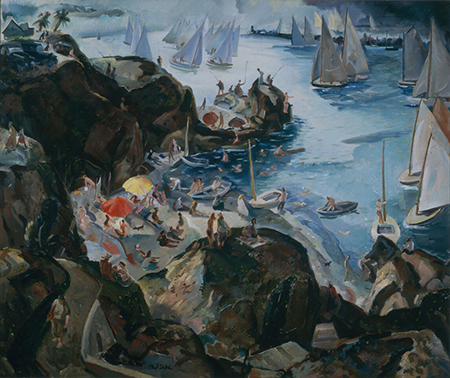 While exhibitions throughout the southland often extol California's sunshine and light, this show stands out more for its variety of art styles and influences. Phil Dike, born in 1906, spent much of his lifetime observing, learning about and exploring, in his own work, the evolving 20th century parade of modernist art genres. These movements included impressionism, realism, American Scene Painting and semi-abstraction.

Dike also developed impressive skills in illustration, in the use of color and in the understanding of different perspectives. His academic experiences included studying under Clarence Hinkle and F. Tolles Chamberlin at Chouinard School of Art, where he later taught. He studied anatomy and figure drawing with George Bridgman, and landscape painting with F. Vincent DuMond, at New York City’s Art Students League. He took private classes with NYC-based George Luks, a well-known Ashcan school painter. And he toured France, Italy, Spain and North Africa while still in his twenties, along with studying at the American Academy of Fontainebleau in France. A catalog accompanying the exhibition quotes from his writings: “White light, uncanny — white blossoms — pink and white clouds, and black ones too, for contrast. It’s Spain, spring and the open road once more …”

The artist’s talent, combined with his devotion to developing his skills and an irrepressible positive spirit, produced a deeply emotive body of work. The exhibition catalog quotes from his 1976 writings: “Each painting is a new beginning, a new day to define his, the artist’s, feelings, thoughts and conclusions.” Curator of the show Janet Blake writes, “His evolution is one of learning, synthesizing, and evolving.” This first major retrospective of Dike’s works in more than forty years features more than sixty paintings in watercolor, oil and mixed media, from the 1920s through the early 1980s. Many of these works have never previously been publicly exhibited. As the title “At the Edge of the Sea” implies, the paintings depict the ocean and other bodies of water, with most illuminated by the magical California light.

Perhaps the most famous early painting in the show is “California Holiday” (1938). With a cliff overlooking a sunny beach, it features sun worshipers swimming and frolicking, while a dozen sailboats bedeck the nearby ocean. The watercolor, “Low Tide” (1936), an early foray into abstraction, is a close-up of swimmers enjoying the sun-drenched day with the low-slung skyline (probably Newport Beach) in the background. His 1949 watercolor, “Rocks Below Corona,” created with sharp lines, illustrates people and sailboats during what appears to be a stormy afternoon. The artist’s 1965 oil, “Spear Fishing,” is more modernist, with a cubist-inspired illustration of people holding spears and large fish.

By the 1960s, Dike, seemingly inspired by Matisse, featured windows looking toward the outside in his paintings. The mixed media “Afternoon Harbor Light” (1965) portrays a woman in diaphanous clothing looking out at the harbor through a floor-to-ceiling window. His 1972 watercolor, “Wave Echo," an abstract study in blues and grays, depicts the waves reflected in the sky. This work was part of his “Wave Series,” from late in his career, with its focus on elements from the sea, sand, sky, shells and birds. In 1979, he wrote a poem which included the words, “Remember the beauty, stored within / Knowing that the tide of life / Is not forever / That it is the beginning / Not the ending.”