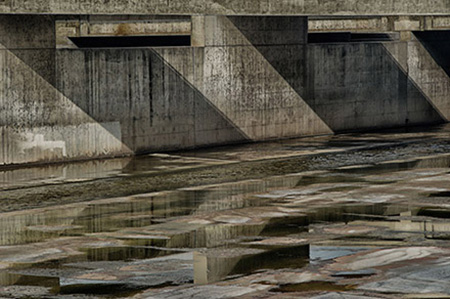 To many, the Los Angeles River serves a singular function as a flood control channel, but to photographer Ray Carofano it is a site of concrete beauty where subtle shifts of light present endless opportunities to capture an unexpectedly picturesque destination. The River extends fifty-one miles through the city. Yet its presence is easily forgotten, as much of it has been fenced off from public view. It is a part of nature that feels entirely unnatural, characterized by erosion, debris, and even homelessness. A barren concrete channel with diminishing water lines serves as a reminder of the drought that plagued Southern California for nearly a decade. Faded graffiti marks are replaced by newer ones, and urban waste ebbs and flows.

In “RIVERRUN” Carofano presents a suite of archival pigment prints that at first glance appear to be landscape watercolors. In his thoughtful focus on specific elements of the River such as the supporting “x” cross beams, Carofano transforms decaying concrete into a study of symmetry. Gentle reflections of a serene area of water reflect the afternoon sun. Works such as “River #62” transform our mental picture of the neglected River and reconsider it as a site of architectural integrity and an escape from the hum drum of the city traffic above. “River #29” is a close up of a fractured wall that seems to run into the water below. The vantage point makes broken concrete feel like geological fault lines, revealing the history of the manmade channel. In “River #66” several birds bask in the shallow water and dry off in the afternoon sun. The silhouettes of the birds divert the eye from the barren concrete slope in the background, but the eye is then drawn down towards a gentle beach-like tide in the foreground.

Embarking on a career in photography over fifty years ago, Carofano studied the entire set of “The Encyclopedia of Photography.” His initial passion turned into an obsession and then his profession.  Carofano’s work possesses a transformative power. Through his lens a destination, seldom celebrated for its architecture, landscape, wildlife or magical natural light becomes a new source of fascination. A River runs through the heart of Los Angeles and “RIVERRUN” is the artist’s photographic diary of a city where beauty exists in the least expected places.