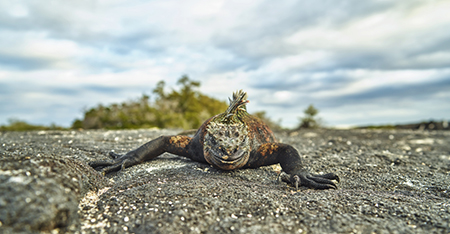 The multicultural photographer Andrei Duman, who was born in Romania, educated in England and lives in Los Angeles, loves to capture the beauty of remote and faraway places without ignoring today’s global environmental issues. His work is informed by the tension of opposites. He juxtaposes tame and dangerous environments, and formally contrasts representational against abstract works.

Among the thirty featured photographs are images from the Galapagos islands, an archipelago 700 miles off the coast of Ecuador, which was the research base for Charles Darwin’s Theory of Evolution and described by the scientist in a letter from 1835 as: "a little world within itself, or rather a satellite attached to America.” Duman’s lens-eye view of this little world includes an image of a yellowish land iguana with blotches of white, gray and brown sitting on a rock. Its sharp-clawed feet are set in a slightly toes-in position as the creature stares directly into the camera. The photo insinuates the iguana’s camouflage abilities, since it is shot in focus to establish contrast to the blurry background, with which the spiky creature would have otherwise completely blended in.

This series also acquaints the viewer with the Galapagos tortoise, a reptile which can live up to 175 years. It's categorized as a vulnerable species by the International Union for Conservation of Nature (IUCN) due to the considerably declining number of tortoises over the past 400 hundred years. The tortoise is zoomed in on so as to get a good view of the texture of its face, neck and legs. An image of a blue-footed booby, a seabird that can dive into the water from as high as 80 feet, presents the animal in a human-like pose, turning its gaze into the camera, almost as if it wants to tell us, “hey, watch me I’m gonna dive into the water now.”

Duman’s “Africa" series has an entirely different feel to it. There is a sense that danger is all around. Among the pictures is the image of a hippo with its mouth wide open, cooling off in a lake in the Serengeti, covered by an aquatic plant. The hippo’s pose underlines it being one of the most dangerous animals in Africa, not only for its size, weighing up to nearly 10,000 pounds, but also for its aggressiveness. Even though the exhibit doesn’t mention it, hippos (Greek for river horse) are very territorial and tend to attack people who get into their space.

Another striking photo is Duman’s image of a cheetah in Namibia, staring into the camera as its resting its face on the ground. In this pose, the cheetah appears more like a somewhat tired and “aww”- inducing puppy than a big cat that runs up to 75 miles per hour to catch its prey. The reversed characteristic stressed by Duman accentuates the face rather than the body. A portrait photo of an elephant shows its skin texture, floppy ears, short tusks and sad eyes. Elephants are desired objects in wildlife photography, yet, one should not forget that they are on the path of extinction, thanks to the centuries long problems of ivory poaching and incursions onto farmland.

In addition to the “Galapagos" and “Africa" images, the exhibit also displays Duman’s aerial works shot from a helicopter with the side doors off. At first glance they look like abstract paintings. The ones that catch one’s eye due to their vibrant colors are “Greensplit,” “Lake Duman,” “White-Yellow” and “Orange Pools,” primarily taken at Owens Lake on the eastern side of the Sierra Nevada mountain range. Although one can’t tell from the photos, Owens Lake is a mostly dry lake that creates an enormous amount of windblown dust, polluting the air. The dust is a health hazard, sometimes causing respiratory diseases and cancer in the people who live close by. In 2013, the lake was considered one of the biggest environmental issues in the U.S.