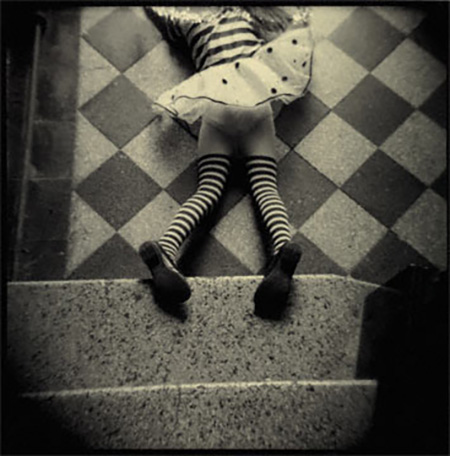 With this introduction to Mexico City-based photographer Cannon Bernáldez, two primary questions arise: First, are documentary photography and fine art photography mutually inclusive? And second, how much does context factor into a viewer's interpretation of what the genre name implies is pure fact? Bernáldez's photographic evolution has been a transition from photographic research and photojournalism to fictional work over the past decade or so, in and around the potentially dangerous and violent omnipresence of Mexico's drug cartel culture.

That's not necessarily to imply that in evolving Bernáldez has left behind a more straightforward, didactic form of photography for a more open-ended, ambiguous variant, or that the former is somehow inferior to the latter. And yet, it's difficult to avert that implication when considering the overarching theme of intimidation and violence. These are underlying elements of a culture with a cloud of threat perpetually hanging over it. This type of documentary photography, when it comes to recording the aftermath of gruesome gang-related killings, is inevitably tainted with a certain amount of sensationalism. Bernáldez incorporates documentary tropes into fictional crime scenes, and is thus able to approach cartel violence iconography with a homogeneous lens that effectively engages the power of suggestion. We are not mere rubber-necking gawkers.

Take a few of her photos from the series "El diablo and a suelto” (The devil on the loose, 2007). A single police officer, in one image, and several anonymous black-pants clad men (presumably officers as well), in another, stand by a figure (or figures) covered and concealed by blankets. When these type of images are attached to a news story about a killing, they would bear the weight of that story. Absent any specific report, it instead becomes a cultural trope, and the sensationalism is beside the point, if it hasn't subsided altogether. Unburdened by specificity we can view the phenomenon, this particular cycle of death, at an emotional distance. All to say that Bernáldez has essentially come full circle — from photojournalism to fictional documentary photography — in an intriguing way.

"El diablo and a Suelto” is shown alongside two other bodies of work: “Miedos" (Fears, 2004-08), and “Hermanas" (Sisters, 2012-14). These latter two bodies of work, particularly “Miedos," comprised of very small (4 1/4 inch square) silver gelatin prints with dark perimeters, are what initially drew me to Bernáldez's work. One image in particular, of a girl, not clearly an adolescent or an adult, is seen only from her shins down. Her Mary Janes and white socks are backed into a cement-tiled corner, a small army of creepy-crawlies (beetles, scorpions, and a small snake) marching toward her. The fact that the insects are fake (rubber or plastic) adds a layer of charm and humor, yet without diluting the very real nightmarish imagining it represents. It’s an impression that is only enhanced by the picture's intimate size.

Bernáldez's other “Miedos” images fan out in an array of directions, one more comical, bizarre, visceral and macabre than another. A figure, perhaps the artist, is bound up tightly in cloth from head to ankles and bent over at the waist. The use of black and white imbues it with a classically vintage look. “Miedos" goes all out in declaring its artfulness.

The more recent “Hermanas" series continues to implement old-school black and white while also integrating color, including two photos from a series of baby portraits, which are born out of a 19th-century tradition of photographing babies posed in elaborate death beds. Circling back to "El diablo," Bernáldez engages a range of emotions and insights by depicting a culture as disproportionately saturated with death-and-violence, but at a remove. Here in Los Angeles, this remove feels appropriate. We see Mexico's culture of violence as an abstraction despite its specificity. Bernáldez offers an abstraction that allows us to contemplate without feeling like voyeurs. As to how this work, particularly the "El diablo" series, plays in Mexico, where this culture is a reality and not an abstraction, that's a trickier proposition.