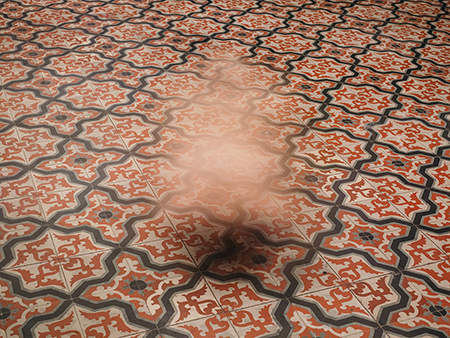 In dream analysis, the house generally represents the self, and all the things that occupy the rooms of the house are occupying your subconsciousness. This body of work by Carmen Argote reflects three months she spent in the grand, Neoclassical Mansión Magnolia in Guadalajara, Mexico. Over that period she took carefully composed photographs of different spaces and rooms, focusing on elements and juxtapositions that manage to capture both what was taking place in the house and her feelings about the house. She came to the project with some baggage, as the building had long belonged to her family. Growing up in Los Angeles, she had heard wonderful stories about it from her father. It is poignant that he suggested the family might one day return, and it would be home again. However, today the mansion is an events space for hire, a venue for concerts, parties, and banquets.

There are no figures specifically shown in these photographs, except for perhaps in ”Tías” and “Las Lindas” where there appears to be a smudge or a small cloud in the center — the artist inserted herself temporarily into the space during a long exposure. She made herself the “ghost” in her own house, representing also, as she has said in an artist's statement, the aunts who last lived there.   Of course, this being a space built by people for people to use, the evidence of lives lived is everywhere. Argote photographed both the main hall, with its elegant details, as well as such humble and forlorn house fixtures as a white-tiled washstand in one photograph and two empty kitchen cabinets next to the refrigerator in another.

These images play with time — Mansión Magnolia  was built in the 1890s, and certainly looks to be from a distant era. Argote also plays with time-displacement, such as in the intriguing “Brincolin,"  which appears to serve as the central events space. The hall is graced with tall columns, a black-and-white checkerboard floor and tasteful cornices frame the ceiling. It all references an upper-class European heritage, with connotations of wealth, nobility and sophistication, which the original builders clearly aspired to. In Argote's photograph, the middle of the space is occupied by a colorful, blown-up plastic castle, the kind of "bouncy" attraction kids enjoy jumping up and down upon during parties. Here, not only is time being toyed with, so is purpose, social construct, and culture — High Culture now serves at the setting for Popular Consumer Culture. Visually, the vibrant colors of the plastic castle sit beautifully against the austerity of the Neoclassic setting.

Taken in the same space, “Black Chairs” records stacks of chairs that form a cube in the middle of the room, ready to be deployed for the next lecture or concert. Here the color of the chairs matches the setting, but their spindly wooden shapes, placed eight deep atop each other, create a contemporary sculpture which brings the viewer back to the present. Argote conveys part of her autobiography through these objects and the space within which they are contained. Old and new, and all the strange contradictions in between.