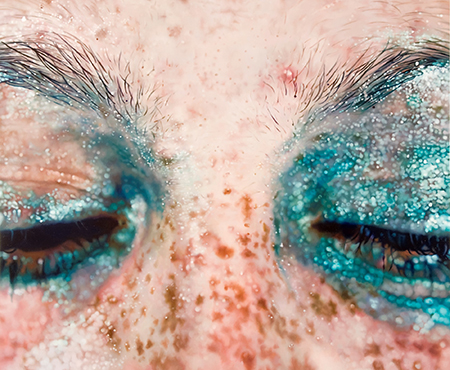 In a conversation I had with a local curator, he posed the question, "What artists working in a photorealist style are making relevant work right now?" We talked about the very few that might have passed that test, but none of the names that we mentioned, nor others that occurred to me, included Marilyn Minter. From her 40-plus year career, roughly the last ten years of her work could easily be described as photorealist, at least categorically. But it's a testament to her style and content that her name didn't arise in that discussion. There's too much viscerality, too much feminism, too much at stake for the work to be ghettoized into a sub-genre.

This late '80s/early '90s era of food and porn, in which Minter combined the media lens of the Ben-Day dot with her signature painterly application (which is both raw and calculated) appears to be the sweet spot of her career arc in light of this retrospective. Prior, she made contributions to the Pictures movement with paintings such as "Big Girls" and "Little Girls" (both 1986), black-and-white newsprint mashups that share some of Cady Noland's early media-saturation angst, and the subsequent launch of her alt-fashion, alt-photorealist close-up phase, a territory she has continued to mine to the present using photography and video in addition to enamel-on-metal paintings.

This latter alt-fashion phase of Minter's is unquestionably visually accomplished, as well as intriguing, yet not without complications. In delving into the cults of fashion and glamour with fashion and glamour, is Minter subverting the gestalt of fashion/fashion photography, or in fact complicit with it, even if there's no brand being sold (other than her own)? Her painted and photographed models are flecked with imperfections — a "Dirty Heel" (2008), freckles and a pimple ("Blue Poles" [2007]) and hyperbolic amounts of makeup ("Glazed” [2006]) — and with varying levels of bling (diamond encrusting, silver drippings, gold). In theory, these subversive takes on fashion imagery succeed in their formation of an alternate universe, one leaving plenty of room for the artist's extreme play and taking this iconography over the top.

Much of this work tends to come off as fashion ads without the fashion; ambitious, great ads, but ads nonetheless. Perhaps Minter is proving that, when it comes to fashion at least, you don't necessarily need a product to be selling a gestalt. When her fashion shoot-based works get their most diffused — through soaked glass filter distortions and graffiti-esque flourishes — thus moving closer to abstraction, they take on a more enigmatic, and ultimately more successful tone. They are less burdened by the overpowering presence of a deeply media-saturated iconography.

It bears special mention that "Pretty/Dirty" will include a series from Minter's art school days called "Coral Ridge Towers,” comprised of black-and-white photos of her older yet glamorous mother smoking in bed, smoking on the couch or applying makeup, all in her nightgown. It's a noteworthy curatorial insertion that supports the artist's career through-line and sheds a thoughtful contextual light on Minter's more recent, complex takes on glamour.