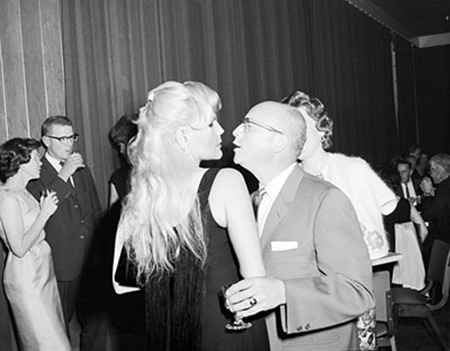 Imagine looking through an album filled with photographs of complete strangers, women for the most part, and wondering who they are or were, what turn of circumstance brought them into the environment in which they were captured for posterity. Photographer Jennifer Greenburg has cleverly appropriated such found images for her own purposes, thus “Revising History,” the title of the exhibition.

The image of an attractive blonde being importuned by an overly attentive geezer, titled “I have never been good at handling unwanted attention,” addresses generations of countless women who, at points in their lives, have had to contend with undesired sexual scrutiny. The picture was constructed in 2015, but that is misleading since the background reveals — at least to the fashion/style savvy — that the original snapshot was taken during the 1950s or early ‘60s.

Greenburg purposely propels herself backward, into the so-called good old days, and then imposes disjunctures of date and era. She takes over whichever role the photographic image demands by inserting herself into the action’s vortex, often eliciting thoughts on “the more things change ...”

Through photographic processes involving more than one negative, the artist obliterates the originally photographed person and inserts her own figure, carefully preparing herself with period dress and make-up and pose, over protagonists such as the above-mentioned blonde. Given that the substitution of the original with the artist’s image establishes a pattern of disjuncture that is a given, this has the two-pronged effect of personalizing the image and so moving it forward in time to suggest that anyone with a modicum of ingenuity can rewrite history. To an extent.

The revisions may be exhilarating to the imagination, but the new narratives are typically limited to Greenburg assuming one character to impact our reaction. The larger question left hanging is how you would regard these now archaic situations if it were you (particularly if you are female). Take for example the triptych accompanied with the legend “Sadie Cohen was upset that I got to model in the Hadassah fashion show. She did not speak to me for weeks.” One can easily imagine the faceless woman shown from the back, wearing the requisite prim suit and matching hat, nurturing her resentment as the model bearing Greenburg’s face struts across the stage in chic coordinated outfits.

“It was truly my day!” builds on a similar theme of women confined into their own sphere, competing by rules and for recognition whose parameters are set by forces other than themselves, yet adopted into their own psyche.

This also holds true for the image titled “I was not the thinnest nor the prettiest, but I was the winner.”  Given the current social climate where a presidential candidate boorishly purports to set standards of beauty for a contest he owns (and for women in general), this image does not necessarily suggest a revision of history, but a slice of the present. Save for the swimsuits.

Greenburg writes that she hijacks a memory and creates a counterfeit image. The sometimes mask-like appearance of her face subbing for the unknown subject bears out this contention. She also raises questions about the role of photography in everyday life and is an effort to map the medium’s future. One wonders what she or others might do, a few decades down the line, with the gazillions of selfies and Instagram images embedded in discarded or forgotten digital devices.