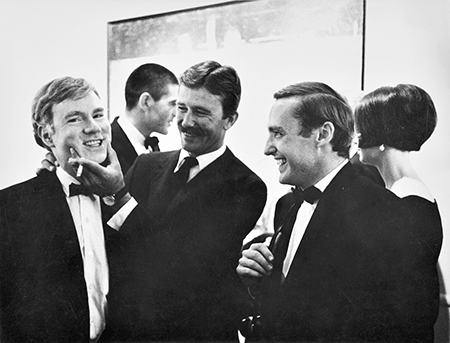 Marcel Duchamp, whose signed Readymades questioned the role of the artist and passed some responsibility for determining what the art means to the viewer, was an influential presence in New York avant-garde circles for years. Duchamp’s attempt to explore ideas of sexual identity via his adoption of the alternate female personality known as Rrose Selavy (in French say: “eros c’est la vie"), continues to resonate with current concerns. The introspection and documented deliberation that enhanced the complex iconography and construction methods Duchamp employed in works such as “The Bride Stripped Bare by Her Bachelors, Even” have fueled countless discussions suggesting innumerable interpretations of that work, including the engaging claim that it serves as an assault on art history’s depictions of virgin birth. He has been long accepted as one of the single most towering creative figures of the last century.

But ironically, the first major American museum retrospective awarded to the chess-playing artist was at a location far distant from New York: the Pasadena Museum of Art. Staged in 1963, the exhibition proved to be a coup for the West Coast art world and the museum’s then Director, Walter Hopps. At age 31, Hopps, who had first seen Duchamp’s work during a high school visit to the Hollywood home of art collectors Louise and Walter Arensberg, was the youngest museum director in the country at the time. Having left Ferus Gallery (which he founded in partnership with Ed Kienholz), Hopps was appointed prior to construction of the familiar building that is now the Norton Simon Museum. The Pasadena Art Museum was in its original home on Los Robles Avenue at the time of Duchamp’s exhibition.

That 1963 gala opening of Duchamp’s long overdue retrospective attracted a memorable crowd. Among the local artists eager to make the most of the opportunity to examine Duchamp’s work firsthand and in depth were Ed Ruscha, Billy Al Bengston, Robert Irwin, Larry Bell, Ed Moses and Dennis Hopper. TIME magazine sent staff photographer Julian Wasser to cover the event. Wasser had begun his career in the 1950s as a teenager shooting crime scenes. A devotee of photojournalist Weegee, Wasser’s reputation for capturing formative moments in L.A.’s history was alone vindicated with his staged image of the 72-year old Duchamp playing chess with a young voluptuous nude, Eve Babitz.

The 20-year old girl agreed to this stunt, proposed by Wasser, to spite her romantic interest — the then-married Hopps — while concurrently shocking the “little old ladies of Pasadena.” Hopps had refused to issue an invitation to Babitz for the opening reception and Babitz sought revenge. Wasser’s photograph inspired both feminist critiques and opposing support addressed to Babitz years before she became an author and significant presence in Hunter Drohojowska-Philp's sassy 1960s L.A. art-world history, “Rebels in Paradise;” the naught photo is the iconic presence behind “Julian Wasser: Duchamp in Pasadena Revisited.”

The two main characters of the Babitz-Duchamp chess game have been transfigured into a life sized, painted wooden sculpture that is the central attraction of this show. The sculpture is surrounded by Wasser’s contact sheets from this session of chess as well as various vintage and modified photographs of Duchamp’s show, including solo portraits of the artist with his work. Appropriations of many of the Readymades and conceptual works of art by Duchamp, produced primarily by L.A. based artist Gregg Gibbs, add a valuable dimension to the show. Alongside reception shots featuring Larry Bell, Billy Al Bengston, Dennis Hopper, Robert Irwin, Ed Moses, Ed Ruscha and Andy Warhol, they allow viewers to re-experience the original Duchamp retrospective, an occasion of greater significance in hindsight that was apparent in 1963.