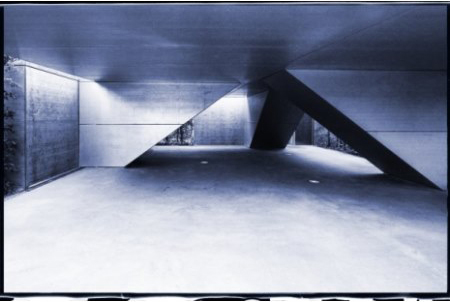 As this tiny marble Earth rolls and pitches in slightly burlesque free-fall, careening between "yes we can," henna-haired clowns and the realities of our deeply tribal natures, it’s good to recall art and design intended to be quintessentially progressive. Such was the Bauhaus.

A seasoned photographer, Watkinson traveled to Dessau, Germany in the 1990s, and created a body of elegant photographs featuring buildings and related objects by Bauhaus artists such as Marcel Breuer, Walter Gropius, Ludwig Mies van de Rohe and Georg Muche.

The Bauhaus was committed — in whatever media being practiced — to integrated arts, to calling  attention artistically and ideologically to relationships between plastic, represented and humanly experienced shape and space. With a naturally refined eye and expert handling of light and opacity, Watkinson proves himself unusually adept  — even in the distinctly 2-D medium of photography — at capturing these subtle Bauhaus goals, as well as conveying the movement’s better known views that line and geometry constitute a universal language capable of producing a better, clearer and more ordered world.

The Bauhaus was never a unified style or vision but rather an overarching philosophical and formal manifesto at the core of which is the idea that public spaces and functional objects with which we interact every moment of our lives impact us profoundly. These interactions have the capacity to instill, even incite complex experiences from deep reflection to political or creative insurgency; the Bauhaus promoted the idea that such forms are the birthright of every urban citizen. Watkinson’s images, such as a starkly functional yet absolutely beautiful sofa, cuboidal table or chair based on the half circle — done for Mies van de Rohes’ 1930 Villa Tugendhat — capture these sensibilities.

There are ironies here that shouldn’t get veiled by the romantic myth of the utopian Bauhaus and frequently cited collaborations like the Weissenhof design-industrial complex — co-spearheaded, one notes, by Le Corbusier, a fascist with well researched ties to France's collaborative, pro Nazi regime. As Dave Hickey and Amelia Jones have commented, the legacy and authority of the straight edge and its implicit control over accident and sensuality comes at a price. That toll may include censorship of difference, of the spontaneously exuberant or the courageously wayward. Many of the men whose works are celebrated here were personally and professionally xenophobic and egomaniacal. They were often armchair socialists vested in their clean, hand-tooled creature comforts, supported by clients wealthy enough to afford and to at least pretend to understand the aesthetic look and mission of the Bauhaus School. It is lamentable that a century later the lure of Bauhaus’ clean, imposing design gives us both IKEA landfill and cookie cutter glass headquarters built to tout the haut “taste” of some multinational corporation.

What remains terrific about this exhibition is that Watkinson pairs Bauhaus works with projects from the 21st century being done right now by provocative, young, award winning makers who revive the most heroic 20th-century demands for accessible aesthetics and social responsibility. A view of the  Dessau-Törten Solar Settlement in Freiburg sits beside astounding new modernist-inspired solar solutions. Bauhaus builder Muche’s amazing experiments with pre fabricated geometric building elements dialogue with awesome images of Casa M-Lidia, from 2003, imagined in simple, sustainable materials by the talented Spaniards Rafael Aranda, Carme Pigem and Ramón Vilalta.

At the end of the day — or end of the line — with all its baggage, there is something clear, nimble and democratic about the modern and contemporary buildings captured here. It is no wonder that fascism and capitalism have equally exploited and fiercely feared the hopefulness of the Bauhaus.