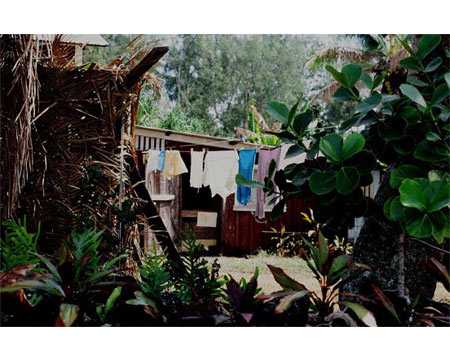 The subject found in the photographic works of both Richard Gilles and Bernadette DiPietro is quite simply the quotidian object. The objects respectively are the billboard, which frequently crosses the path of the motorist; and the clothesline, which is rarely seen anymore in metropolitan cities. Aside from this shared fascination, Gilles and DiPietro present diametrically opposed worldviews. DiPietro sees cultures as held together by a literal and figurative fabric, and Gilles sees the ailing economy reflected in blank billboards along American highways.

The title of Gilles’ show, “Signs of the Times,” takes its name from an outdoor advertising trade publication, but he insists that there is a correlation between the economic crisis and the series of blank billboards here recorded. The panoramic photographs dotting our double-decker highways and sprawling desert vistas might have held images of landscape photographs if not for this intervening variable of the economic downturn. Though referenced cryptically, that fact consumes the compositions. The billboards are found in varying states of repair. Some are in shambles, barely held together by planks of wood. Others are solid steel structures that have been erected in what seems like the middle of nowhere. Others, like “Ad America,” the name of its prominent corporate owner, flashes its now barely visible logo in a billboard for a Burlesque show called “40 Deuces.”

“Signs of the Times” is not so much a record of our current history, but a manufactured theme that sprang from Gilles’ imagination. There is no history that connects the series of photographs. If it were a cultural document of the economic tailspin, Gilles might have returned to the site of each photograph to track the progress or deterioration of his sites over time. Corporations keen to hawk products to passing motorists do not simply forget to make advertising buys. While the economy may have had something to do with the fact that the billboards were blank the days Gilles photographed them, it does not mean that they are that way later on. If perhaps the title, the artist's choices and perhaps our own projection turns these images into “Signs of the Times,” they are really just billboards encountered at a particular moment.

Bernadette DiPietro relates to clothes lines as “the flags of nations.” Her photographs document an age-old chore that transcends cultures and hasn’t been swallowed whole by technology. DiPietro herself admits that she did not own a new electric dryer until 2002, when she was 53 years old. Laundry lines are a practice that reveals the literal fabric of a family, and makes public the very intimate garments we are seldom seen in, like the men and women’s undergarments, all crisp and white, that she documented in Ojai in 1995.

“Laundry Lines” shows how laundry left to dry becomes a part of the environment - blending into the archways, hiding behind foliage, and running parallel to telephone wires. The clothing inherits the wind, the odors, and the sounds of the surrounding area, even as they allow perfect strangers to visually consume the lives of other perfect strangers. Clotheslines are seldom seen inside metropolitan cities anymore, so they read to us as romantic, nostalgic reminders of a simpler time. In the city people bring the outside in by washing their clothes indoors. The towns and cities of “Laundry Lines,” where they do hang their clothes out to dry, thereby bring the inside out.

While it is uncertain what advertisements, if any, may currently occupy the billboards in Gilles’ series, DiPietro’s affection for clotheslines reveals the intimacy of humanity through a simple, antiquated gesture.