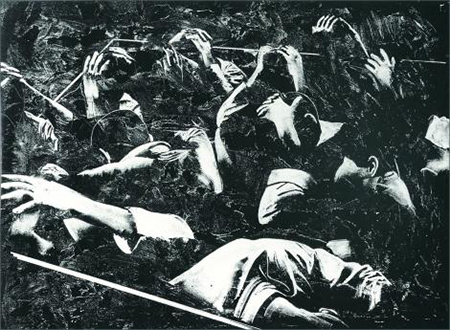 The intense graphic work of Spanish masters Francisco de Goya (1746-1828) and Rafael Canogar (b. 1935) collectively provoke feelings of loss, despair, and grief through depictions of past conflicts and wars in “One Cannot Look:  Graphic Wars." Goya’s iconic “Disasters of War” series was published long after his death, but its staying power since has diminished none of its impact. The confrontational works illustrate the consequences of bloodshed between Spain and Napoleon’s France during the Peninsular War of 1808-14. These pieces show human limbs that are hung from trees and acts of violence so egregious it will cause the viewer to flinch.

In contrast, the somber nature of Canogar’s work is quieting. In “Los prisioneros” intense sadness is activated by the image of a group of prisoners whose identities are obfuscated by darkness. They are only visible through their highlighted hands that shield their own heads in terror. A lone arm in the foreground reaches outward in what seems like a desperate plea for help. An equally solemn image by Canogar titled "El muerto” (The Dead One) features a deceased individual on their back. The foreshortened and motionless body’s feet protrude toward the viewer with his hands carefully placed on his chest. A powerful and emotionally charged set of prints, the two artists' outrage over war and violence is only contrasted by their uniquely articulated voices of dread, concern, and protest.