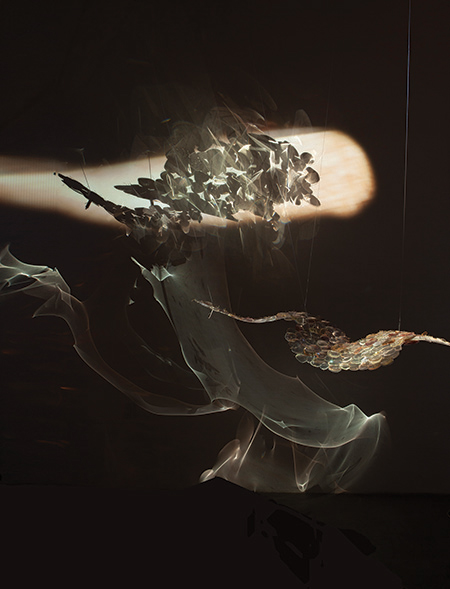 When the early Light and Space movement emerged in Southern California, it came from a group of artists who worked their way through the crucible of 50s-era painting and sculpture. They deliberately sought to dematerialize the art object while intensifying visual experience. Light entering the eye registers the objects that we see; why not just stick with pure light? The simple act of cutting a shape in a wall led to deep encounters with contemporary media (eg., plastic resins) and technology (eg., advanced light fixtures) and one of the 20th century’s key aesthetic breakthroughs was born.

Long established as a lighting designer, Marilyn Lowey’s track record traces the opposite trajectory. Privileged to deploy the latest lighting hardware and technology, Lowey for decades served the demands of entertainment spectacles ranging from concert tours by Neil Diamond or Siegfried and Roy to the Pope’s U.S. visit in 2008 or the Opening Ceremonies of the 2003 World Cup Cricket Games in Capetown, South Africa. Even as she upped the ante on what lighting design can do in the service of mass entertainment, she became increasingly drawn to its possibilities on a more intimate, purely aesthetic stage. Virtually the opposite of, say, James Turrell’s path to the mind-boggling scale of the Roden Crater, the three works by Lowey that share a gallery space, “The Sanctuary,” “ Lévitation Ashra #1 (Mom’s Shadow)” and “ Lévitation Ashra #2 (Mom’s Birthday),” keep things comparatively small and simple, with choices geared to intensify feeling and reflection. The issues oscillate smoothly between the personal — the passing two years ago of the artist’s mother — and the transcendent.

The objects central to her meditation resemble carpets or drapes, but comprised of eyeglass lenses stitched together with filament. Eight of these are hung straight from the ceiling in two concentric four-sided trapezoids that surround an ordinary suburban dining room chandelier in “Sanctuary." Light softly emanates from the latter, filtering out beyond the lens hangings. If the title evokes a place of religious worship, the image evokes stained glass and, metaphorically, a gathering of spiritual energies that are alike yet infinitely varied, singular yet shattered.

The other works share the same title because each was produced in response to the death of the artist’s mother. The assemblage of eyeglass lenses is suspended to float horizontally in midair, evoking easy associations of magic carpets, birds and, of course, the soul leaving the body. Eschewing banks of light sources and carefully programmed LED displays, a single light element produces a rich cast reflection and shadow. A video projected through the lenses in “Lévitation Ashra #2 (Mom’s Birthday)” revises the literal recording of an internment into a purely visual, constantly morphing mix of drapery and cubistic tumult. If the lenses comprise the only physical object (excluding the lighting fixture), it gains or loses presence from moment to moment as the eye is drawn into that light. The wall between the physical and the ephemeral feels less and less certain.

Concurrent solo exhibitions include very small edition photographs by Sasha Raphael vom Dorp that record visual interactions of sound, water and light that reveal highly complex patterns in a rainbow of colors; Echo Lew’s “Light Drawings,” in which the artist moves lights before a camera over a one minute exposure period to produce staccato line work that is complex and elegant, as well as paintings of local street lamps by Teale Hatheway handled in a decorative, graphic shorthand.