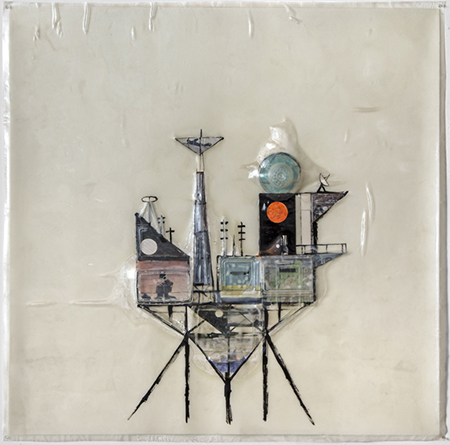 Russell Crotty’s new show “Another Green World” signals a turn in his concerns as well as his style. For many years he has been known for his tightly detailed drawings of stars, solar systems and other astronomical phenomena on paper and on three-dimensional globes. These were made with archival ball point pen, and were done by direct observation through telescopes. However, severe tendinitis as a result of such hand-intensive activity forced him to find other methods in order to continue making art. He experimented with small branches dipped in black ink, to make line drawings, and found that he liked the results.

Around this time he had also been deeply troubled by the disastrous BP oil spill of 2010, the country’s worst offshore oil spill ever. The Deepwater Horizon explosion resulted in 11 deaths and untold environmental damage, as some 3.19 million barrels gushed out before the damaged well could be plugged. Oil derricks were therefore much on his mind, and Crotty drew a number of works on paper that started out looking like oil derricks. In subsequent work, this idea somehow morphed into lunar landers or settlements on other planets. That is, his thoughts went from Earth-bound objects, and then back to the things that continue to interest him most — what’s in outer space.

The new kind of drawing produces pleasantly uneven lines, some thick, some thin, and some a bit scratchy. It’s a reminder of the age and even temporary nature of these derricks, out there pumping oil from the sea for decades, a nice detail on the horizon which we cease to notice until something — like an oil spill — goes wrong. For the larger works, about four feet by four feet, of which there will be about ten, he also worked the surfaces, adding bits of cut paper and transparent plastic containers, placed face down, then covered them with fiberglass and a bio-resin. For a built-in ecological touch, he used recycled plastic containers and bio-resin, which is a derivative of pine sap. In some instances he added color to the bio-resin, creating a light color wash to certain areas, sometimes adding bluish tones, sometimes magenta ones.

In “Outpost Two” a top-heavy derrick sits on a system of stilts, with antennas and communication and tracking devices mounted atop towers and buildings. The lower half has a bluish wash, suggesting that it is in the middle of the ocean, with a gray sky hanging ominously overhead. The plastic containers and the resin overlay provide a certain dreamy distortion. In “Outpost Three,” which Crotty thinks of as a lunar module-type lander, the platform is also propped atop stilts. Some of the shapes are defined by simple block or round shapes — a red dot on one tower catches the eye. Overall, there’s a certain retro-scifi look to these multi-media works, the way we might have imagined the future in the 1950s and 60s.

In the West gallery, there will be one multi-paneled mobile, "Exoplanet Interfusion," suspended from the ceiling.  To make the components, Crotty cut out ovals and odd shapes from plywood and placed drawings on them. On one oval panel is the profile of a mountain range on another planet, with pointy peaks, which is covered with several plastic containers and the resin coating seen in the larger works. Several pieces are shaped and drawn with the lines of driftwood. Yet others have letters and numbers designating identified stars or star systems. It's a whimsical work, the musings of an artist who likes to think about the big picture, but knows that our real concerns are right here, all around us.