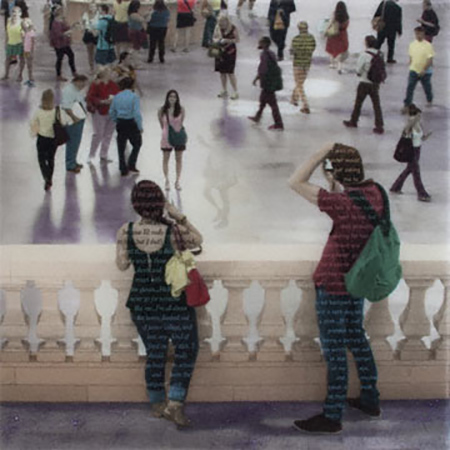 Anyone aware of his or her surroundings knows that any place in the world offers a potential people watcher’s paradise. That holds especially true for Sherry Karver, who specializes in text-enhanced, multi-media works. Paint enhances photographic images of crowd scenes mounted on wood panels. Karver then introduces stories about the people and things she has observed and recorded, inserting the text inside the outlined contours of selected figures.

Sometimes amusing, other times poignant with a touch of the absurd, Karver’s work manages to convey the artist's impressions in a manner that skewers the often inherent egotism and pretentiousness of so-called word art or most video, save for animation. Titled “Word on the Street,” this show of new work takes viewers out of their metaphorical cubicles and out into the street, museum or other public spaces where people tend to congregate.

Take for example the image of what one would see as the embodiment of a typical young woman hurrying to wherever she might be headed. That is not where Karver directs the narrative.  The text is about who the subject is, we are to take it from there: “22 yr. old college grad with a degree in biology, knows she’s eccentric but not freaky, putting everything under a microscope and washing dishes before putting them into the dishwasher ...” Not your archetypical roommate. Clearly Karver has built not on this woman's appearance, but on her anxious expression dominated by a pair of fashionable glasses. Too bad she did not expound on an even more anxious looking, bespectacled male nearby. It is the words Karver adds, not space that distinguishes foreground from background.

Note that Karver’s compositions are built on small groups or larger crowds before she trains her magnifying glass on individuals. Her choices as to where text is placed do not depend on placement or viewing angle of a given figure, but the artist’s whim.  In “Harmony of Strangers” a gray-haired man with his back to us appears to be in good shape for a senior center denizen. Karver imagines him among a bevy of eagerly interested ladies, but he has no desire to commit to any of them.

In “Just a Narrow Bridge” Karver visits a museum populated by various art lovers, students, tourists and the like. But, most notable here, she zeroes in on a Greek statue, a somewhat forlorn looking creation, and crafts a story about the thoughts that the mythological character it represents might have. To wit: “I thought I was the most famous hero in Greek mythology, but nobody even cares anymore that I slayed (sic) the monster Medusa and holding up her heavy head for all to see ...” Meanwhile, the people looking at the likeness of Perseus seem to be as mystified by his significance as he is perplexed by their lack of adulation.

“News of the Future” depicts a traveler wearing a hat and suit talking to an older woman wearing equally vintage attire. Karver infuses the man’s image with the information that he is from a small town in Iowa, collects movie memorabilia and still lives with mom. The lady’s tale is left to our imagination. Altogether, this series of work might be dubbed “the watcher.” (Karver also branches into other directions of expression not included in this show.)

“Word on the Street” appeals for its technical skill brought to the service of Karver's verbal and visual imagination. As rendered, the figures are slightly blurred but still individualized. The text is what sharpens the way we see one figure in relation to others made generic for missing that degree of detail. These are rich enough works that they can be revisited and reimagined repeatedly. They invite us to engage our own mise en scene.

If you are searching for profound social commentary, Karver politely addresses the disconnect between people by focusing on their internal narrative rather than on their relationship to or any reflection on the other people — presumably but not necessarily strangers — standing beside or nearby them. None of the more sinister aspects highlighted in the daily news (no criminals or terrorists here, thank you) appear, thus Karver’s works offer a rather comforting view of humanity.