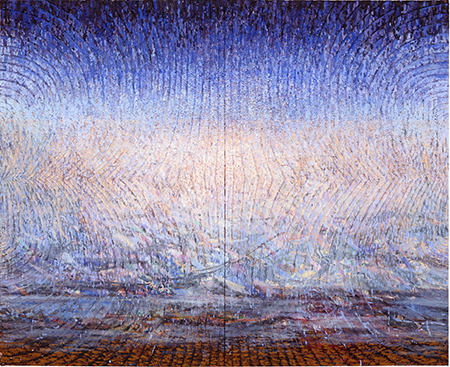 The matter of artistic influence unfolds with poetic grace, intellectual rigor, as well as a fierce quality of engagement in this collection of paintings by the young and immensely talented Christine Frerichs. In her large sturdy, colorful, yet tender mixed media works on canvas, all displaying thick, textured layers of paint often scarred and molded into sculptural relief, one readily perceives echoes of Jackson Pollock, Larry Poons, Jay DeFeo, Anselm Kiefer, Antoni Tapies, the later work of Brice Marden and even the cosmic creaminess of Vincent Van Gogh. However, unlike the angst ridden struggle with one’s artistic precursors, the likes of which the literary critic Harold Bloom analyzes in his book "The Anxiety of Influence," Frerich’s paintings all present both feeling and proof of confident independence.

In a statement, Frerichs also speaks of Agnes Martin as a painter who has meant much to her. While Martin’s muted aesthetic seems at opposite ends of Frerich’s tactile and opulent spectrum, the two artists clearly share a tone poet’s sensitivity to color’s subtle inflections, as well as the blending of feminine and masculine energies into works symbolizing human wholeness.  The theme of the personality’s integration receives further augmentation as each painting consists of two canvases positioned closely together side by side, with the shared vertical crack between them serving as a visual caesura that paradoxically separates and welds the halves together. The metaphor may be of a conversation between twins, lovers or any two people truly listening to and caring for one another.

Several of the works here, such as “On Love (for Agnes Martin),” present a chevron pattern of thick and lumpy paint that falls vertically then swerves and morphs into concentric swirling arcs replete with the enveloping folds of a comforter crumpled on a bed. In “Aubade (2)” the artist superimposes faintly washed sections of iridescent color — the luminous scrim of a sunrise — over and into the painting’s densely laid foundation to add another layer of visual delight.

In “The Light Between US (Lake Tahoe)” Frerichs inlays into her swooping chevron the image an expansive apocalyptic landscape that pulses with virulent cloud forms and is slashed by a row of blotchy cross-hashed mountain shapes. The entire image rises from a floor of golden earthy brown bricks that penetrates the scene like a road. It's a dynamic drama of primal creation and destruction of Wagnerian proportions.

A few smaller canvases (8 1/2 by 11 inches) are improvisational works on single canvases. In these Frerichs explores color and compositional combinations that are by turns visually sophisticated and primitive. In these, as well as in a few of her larger works, Frerichs integrates a homemade recipe of a substance she calls A.C.P., which stands for Activated Carbon Paint. Its main ingredient is found in things like the tops of Brita Water Filters. This material strains nothing out but rather lets a kind of primal ooze in. It’s a congealing element that supports, fertilizes, and almost bruises the paintings with what the Spanish poet Garcia Lorca called “duende,” meaning a heightened state of soul. It’s also the same energy that pervades and characterizes all of the work in this powerful and riveting show.