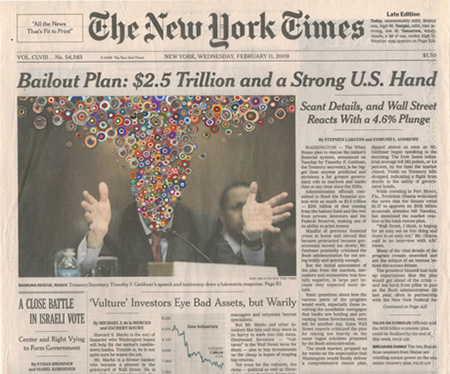 Native son Fred Tomaselli moved to New York City in the mid-eighties, leaving Disneyland and its mind-bending take on faux experiences behind. Veterans of the LA art scene in the nineties remember his pill-laden offerings that found their way back to the local galleries. Although Tomaselli’s immersion in the local drug culture of Orange County made his reputation as an artist who embedded pharmaceuticals in resin covered collages, this latest body of work runs away from pleasure and escapism to confront the daily reality of the twenty-first century. That realism arrives daily upon his Brooklyn doorstep with the thump of a tossed copy of The New York Times. As all inveterate readers of the Times know, the major stories of the day can be easily grasped according to a layout formula long emulated by most print media. The most important events are “above the fold,” announced by a large photograph centered between a left hand column (less important) and a right hand column (most important) headlining the day’s leading stories. One day, Tomaselli’s attention was captured by a recent arrest of a financial wizard, caught in a brilliant moment of fate’s cruel irony.

On an ordinary Wednesday — March 16, 2005 to be exact — the former CEO of World Com, a telecommunications giant, Bernard J. Ebbers, was photographed clutching the hand of his lovely wife. The story was about Ebbers' conviction of high corporate crimes, and the resulting sentence of twenty-five years in prison. What struck the artist was not the $11 million fraud, not the trope of the long-suffering wife who stands by her man, but the metanarrative of the Fall and the subsequent Expulsion from Paradise. Tomaselli the artist intervened with the image, transforming the paparazzi into avenging angels driving Ebbers and his wife from the Eden of Wall Street. He exploded the face of the New Adam into a colorful acid trip of monumental magnitude. Around the clasped hands of the soon-to-be-separated couple, he created an areole of exploding energy as a beam of angry light shoots from the eye of the wronged wife. Upset and angry after the failed occupation of Iraq and confronted with a narrative of widespread ineptitude and corruption at home, Tomaselli indulged in the luxury of a super rant.

Although the landmark Ebbers intervention with the Times was based upon his own version of the Biblical tale, "Expulsion of 2000," the eighty front pages that followed were the result of an immediate response to the news above the fold. If the prospect of viewing eighty-odd pages of a newspaper at a museum sounds daunting, the scans of daily news run through Tomaselli’s lively wit are amusing, pointedly ironic and at times strikingly perceptive. Tomaselli characterizes himself as someone who yelled at the Times during the Bush administration, a time of loss of innocence and faith.

He gradually became a “conductor” of images, using related news columns as the straight man to the artist’s satirical jokester. The flooding of New Orleans becomes a vivid neon pattern snaking around the projecting roofs of homes. Putin arrives in St. Petersburg for military exercises, totally nude, except for his Pussy Riot balaclava. Mitt Romney walks, hand extended, towards three children, clad in ghost costumes. Bin Laden’s hand waves goodbye as he sinks under lovely spirals of blue and green. Courtesy of Tomaselli’s sense of the absurd, one relives the recent past and feels somewhat avenged, if not placated, by the edgy and unrelenting judgment of one of the most politically incisive artists of our time.