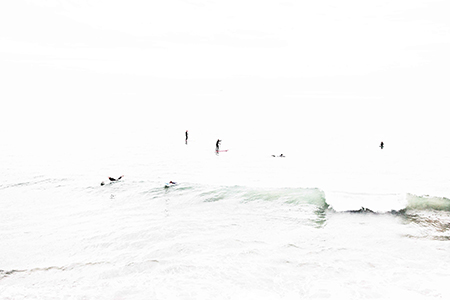 If all the world’s a stage, then the multi-talented photographer Gil Kofman has selected its most fluid, romantic, and mystical “floor boards” on which to set this performance-like exhibition. Indeed, Kofman’s photographs of surfers, performing on the waves in varying positions, states or stages of surfing, have the metaphorical look and feel both of actors in an ensemble hitting their choreographed marks and of ordinary human beings engaged in life’s flow. The late great scholar and mythologist Joseph Campbell often said that he felt most alive and at one with the world while running races for his Columbia University’s track team.

Kofman’s surfers project a similar sense of kinesthetic vitality and yin/yang harmony as they quite literally traverse on their boards the shape-shifting membrane of the ocean’s surface. If it weren’t for the works' stunning beauty, one might feel content to settle for grasping the message that surfing is like making art. Like surfing, the objects that artists call forth forge an inseparable union with the acts of their creation. In other words, the answer to the question posed by W.B. Yeats in a poem, “How can you tell the dancer from the dance?” is that you cannot.

Just as the surfers in these pieces appear thoroughly engaged in their “play,” so does Kofman bring to his production a confluence of intelligence, lived experience and professional creative know-how. Born in Nigeria and raised in Kenya, Israel and New York City, he studied physics at Cornell, attended NYU’s Graduate Film School and earned an MFA in playwriting from the Yale School of Drama. He has exhibited his photographs widely, while his play, "American Magic," was produced in New York, L.A. and London. Kofman has published short fiction in Gordon Lish’s The Quarterly and he helped produce, edit and shoot the Sundance documentary “DERRIDA." His film The Memory Thief,” which he wrote and directed, won the Feature Award at the Edmonton International Film Festival (and aired on the Sundance Channel), among other creative achievements.

One might think that photographs from such a eclectic talent would show the seams of a dilettante or the unfocused blur of a peripatetic world traveler. Think again. These somewhat grainy, shimmering metallic, softly muted yet shiny and bold shots use the same backdrop of the ever-changing sea, in and on which the artist’s troupe of black-wet-suit clad surfers seem to scamper into always surprising and dynamic configurations of varying degrees of geometric tightness or looseness. They appear at different distances from the viewer in several of the compositions, so read larger or smaller depending on the shot. There’s a frequent emphasis on up-close, fast-paced action, as when a young man struggles to remain upright on his board that itself wrestles with the breaking crests of a wave. Other pictures offer a calm and meditative gaze, as in the image of a group of surfers sitting on their boards atop a still sea as they wait for the next wave … or just … wait.

Perhaps it’s the improvisational element of chance that stands out as the work’s pervasive modus operandi, serving to unify the collection into something that feels integrated and whole. That these images of such fleeting randomness, the sea configuring as it will the at times stick-figures of the surfers can also feel so consciously choreographed lies at the heart of Korman’s visual and intellectual sophistication.