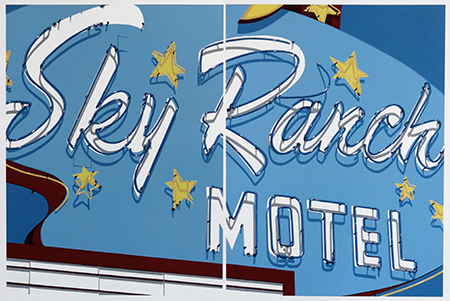 Whereas some people sport Mohawks, very few of those people have hair that stands tall and proud and also devote their lives to resurrecting an obscure printmaking technique called “reduction linotype process.” Sure, there was Picasso but he was bald, so that leaves Los Angeles artist Dave Lefner and his magnificent comb-up who carries on a printing technique almost lost to history. Even more incongruous, this very contemporary printmaker has dedicated his career to seeking, finding and photographing neon signs, signatures of the past, marking with their distinctive calligraphy waning decades of a city of lost angels. Lefner moves through the streets of old Los Angeles, not at night, for the neon interests him not as a form of light, but as a linear shape that during the day cast shadows. It is the dark and fleeting shapes that Lefner wants to capture.

More than the signs themselves, these shadows are Lefner’s metaphoric subjects, because his photographs capture a relic of the past at a particular moment during the day when the writing is doubled and tripled, floats in layers and flaunts its unmoored presence. Sadly many of these historic objects of popular culture have disappeared even since Lefner began to record their existence. Except for someone looking for, say, the Stardust Motel or the Sky Ranch Motel, these relics exist as white noise in an urban landscape. At first glance, Lefner’s work is an example of Photorealism, alive and well in the 21st century, but appearances can be deceiving. His work is not Pop Art or even Pop Art related — Lefner is far too young. His prints are contemplative acts of preservation of bits of visual history that no one will miss until they are gone.

Lefner was an art student during the heyday of Postmodernism, when everything had already been done and the mood was one of belatedness and cynical ennui. Conceptual Art, already a survival of the last gasp of modernism, masquerading as something “post,” did not appeal to him: a piece of paper tacked to the gallery wall lacked, for this artist, a sense of connectedness. Brushing aside the trope of “deskilling,” Lefner searched for a reconnection with something scorned at that time: good old-fashioned craft. In his search for something of his own, he stumbled upon Picasso’s reduction process, a mode of making multiple prints on a linoleum block, that the aging Spanish artist probably invented. For Lefner those Picasso prints, like the cut-outs of Matisse’s late work, were directives leading him to a way in which he could combine his penchant for graphic design with recovering handwork as an art form.

When one looks closely at the "Hollywood Motel" print, it becomes clear not only that this is a combined result of multiple pulls, but also that the concept behind the printing process reflects the actual “build” of the original sign itself. Think projections — the sign projects beyond the wall of the building and the letters project beyond the bed of the support. Rising above an orange ground, the white letters with a black outline are recreated as three-dimensional and their bracketing onto the orange ground is precisely indicated. The neon itself is a yellow rewriting of the words and reiterates the white letters. There is an additional repetition of the graphics: the cast shadows, the only element that has no real material existence. And in the deep background are the sienna lines that indicate the actual construction of the orange wall.

Think repetition — the photograph is a repetition of the sign and the print is a projection of the photograph. Each color is a separate cut into the lino, which is “reduced” or cut away with each pass. When trying to imagine the carving process itself, the viewer is forced to think in reverse and backwards as the block sinks lower and lower while an illusion of higher and higher projection is created. "The Half Moon Motel," with its sky blue and amusingly gold letters, tells a tawdry tale of a dump that cannot rise to the occasion of a hotel and suggests its louche past. And yet, despite the noir connotations, these signs, so lovingly carved out by Lefner in acts of homage, cast their own shadows of sad nostalgia. The viewer greets these surprisingly large prints with the delight of recognition and a pang of realization that these neon advertisements are relics without romance valued only now as they are disappearing.